New Delhi: The Congress has issued a 3-line whip mandating its members in the Rajya Sabha to be present on the day of presentation of the Citizenship Amendment Bill (CAB). The Bill will be put to vote in the Rajya Sabha on Wednesday. After the CAB had an easy passage in the Lok Sabha, the Opposition […] New Delhi: Barely 24 hours after Shiv Sena’s face in Parliament Sanjay Raut vehemently supporting the Citizenship Amendment Bill and equating it with support for India, Sena chief Uddhav Thackeray took a complete U-turn. On Tuesday, the Maharashtra Chief Minister and Sena chief said that it is BJP’s illusion that those who disagree on CAB are […]

New Delhi/Washington: India on Tuesday termed the comments made by the US Commission on International Religious Freedom (USCIRF) on the Citizenship (Amendment) Bill (CAB) as “neither accurate nor warranted”. Ministry of External Affairs spokesperson Raveesh Kumar, in a statement said, the Bill that was passed by the Lok Sabha on Monday midnight, “provides expedited consideration for […] 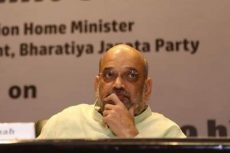 New York: A US religious freedom commission has called for sanctions against Indian Home Minister Amit Shah if the controversial Citizenship (Amendment) Bill (CAB) is passed, claiming that the proposed legislation introduces a religious test for citizenship. The US Commission on International Religious Freedom (USCIRF) said in a statement here on Monday that it was […]

New Delhi: The controversial Citizenship (Amendment) Bill 2019, which seeks to give Indian citizenship to non-Muslim refugees from Pakistan, Bangladesh and Afghanistan, was passed in the Lok Sabha on Monday midnight though it was vehemently opposed by the major opposition parties which described it as “anti-Muslim”. However, the government rejected the opposition’s claims, saying the Bill […]

New Delhi: The Lok Sabha on Monday passed the Citizenship (Amendment) Bill, 2019 after a six-hour long debate which saw a fiery speech by Union Home Minister Amit Shah defending the controversial Bill. Among a total of 391 members present in the Lower House, 311 voted in favour of the Bill while 80 voted against […]

New Delhi: The Citizenship (Amendment) Bill (CAB) faced criticism from All India Majlis-e-Ittehadul Muslimeen (AIMIM) chief Asaduddin Owaisi who tore a copy of the draft legislation in the Lok Sabh on Monday calling it “arbitrary in nature” and “against the Muslim community”. The Hyderabad MP expressed objections over the CAB’s nature while participating in the debate, […]

New Delhi: All India Majlis-e-Ittehadul Muslimeen (AIMIM) chief Asaduddin Owaisi on Monday tore the controversial Citizenship (Amendment) Bill in the Lok Sabha while participating in a debate, calling it “arbitrary in nature” and “against the Muslim community”. The Hyderabad MP tore a copy of the Bill after expressing his objection over its nature, saying “secularism is […]

New Delhi: The Congress has decided to oppose the Citizenship Amendment Bill which is to be introduced on Monday by Union Home Minister Amit Shah in the Lok Sabha, after its parliamentary strategy group meet at Sonia Gandhi’s residence here on Sunday. After the meeting, Congress leader in Lok Sabha, Adhir Ranjan Chowdhury said “The bill […]

New Delhi: The Union Cabinet on Wednesday approved six bills including the Citizenship Amendment Bill and extended reservation for SCs and STs in the Lok Sabha and the State Assemblies for another 10 years. Responding to questions, Information and Broadcasting Minister Prakash Javadekar said the Citizenship Amendment Bill takes care of India’s interests. “I am confident […]