New Delhi | Known for their biting wit and unmatched humour when it comes to memes, Pakistanis on Twitter lashed out at the government’s decision to hike the price of petroleum products, Geo News reported. Pakistanis woke up Saturday morning to find out that the Ministry of Finance had okayed a Rs 10.49 per litre hike […]

London | British Conservative MP, Sir David Amess, was on Friday repeatedly stabbed by a knife-wielding man at his constituency in Essex, and succumbed to his injuries later, media reports said. Sir David, who has been an MP since 1983, was stabbed as he was going to hold his “constituency surgery” — a public meet where […] 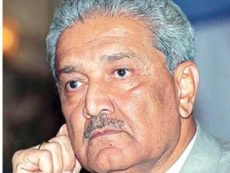 Islamabad | Pakistani nuclear scientist Abdul Qadeer Khan, who is the founder of Pakistani nuclear programme, passed away due to lung problems on Sunday at the age of 85, his family said. Khan’s health condition started deteriorating on Saturday night, after which he was rushed to the Khan Research Laboratories Hospital in Islamabad, according to his […]

New Delhi | At least 20 people were killed and over 300 others injured after an earthquake measuring 5.9 on the Richter scale jolted Pakistan’s Balochistan on Thursday morning, according to provincial authorities. According to the National Seismic Monitoring Centre of Pakistan, the 5.9-magnitude quake struck at 3.01 a.m. with focal depth of 15 km and […] San Francisco | A whistleblower, who leaked a selection of internal documents from Facebook, has claimed that “Facebook over and over again, has shown it chooses profit over safety”. A cache of documents from within Facebook were leaked to the Wall Street Journal by a whistleblower, prompting an exhaustive probe into the social network. Following the […] 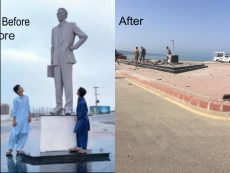 New Delhi | A statue of Mohammad Ali Jinnah in Gwadar was destroyed in a bomb attack, claimed by the outlawed Baloch Libe­ration Army, Pakistani media reported. The statue was erected earlier this year at Marine Drive which is considered a safe zone, said a Dawn news report. Official sources said some militants planted an explosive […]

United Nations | Prime Minister Narendra Modi headlined India’s scalable and “cost-effective” tech solutions within minutes of beginning his address to the United Nations General Assembly on Saturday. “When India grows, the world grows. When India reforms, the world transforms. The science and technology based innovations taking place in India can make a big contribution to […] 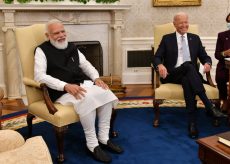 New York | “We’re launching a new chapter in the history of US-Indian ties and taking on some of the toughest challenges we face together,” President Joe Biden said on Friday as he and Prime Minister Narendra Modi began their summit in a fast-changing world throwing up problems and new issues at dizzying speeds. After their […]

London | Covid is unlikely to mutate into a deadlier variant and will eventually end up as a common cold, said Professor Dame Sarah Gilbert, who created the Oxford-AstraZeneca vaccine. Cutting down fears of a more deadly new variant, she said that viruses tend to “become less virulent as they circulate” through the population, Daily Mail […] London | After facing backlash for its coverage of origins of the Covid pandemic, the much acclaimed scientific journal — The Lancet has now published an ‘alternative view’ from 16 scientists. The international team of health experts, in the open letter, make an appeal for “objective, open, and transparent scientific debate about the origin of SARS-CoV-2”. […] 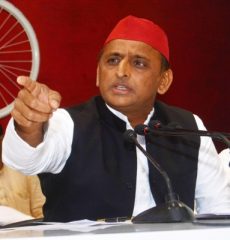