Bhubaneswar: A day after schools reopened across Odisha for the students of Class X and XII, as many as 26 teachers and two students have tested positive for Covid-19 in Gajapati district, an official said on Saturday. Gajapati Chief District Medical Officer (CDMO) Pradip Kumar Patra informed that 26 teachers have tested Covid-19 positive in the […]

Bhubaneswar: The Odisha Crime Branch on Wednesday arrested the dismissed Inspector incharge of Biramitrapur police station in Sundargarh district for his alleged involvement in the gang rape of a minor girl and forced termination of her pregnancy. Anand Chandra Majhi was arrested from Handapa area of Angul district. “… he will be presented before judicial […]

Bhubaneswar: A servitor of Puri Jagannath Temple has tested positive for the Covid-19 virus, informed Puri District Collector Balwant Singh on Tuesday. The news came amid a curtailed Rath Yatra underway in Puri after the Supreme Court gave in to Centre and Odisha’s request, partially lifting its last weeks complete ban on the festival. Covid 19 […] 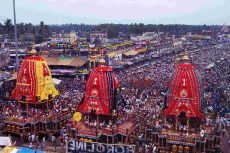 Bhubaneswar: The Odisha government has imposed a complete shutdown in Puri district from 9 p.m. on Monday till 2 p.m. on Wednesday to hold the Rath Yatra without devotees by adhering to the COVID-19 guidelines. Special Relief Commissioner (SRC) Pradeep Jena, in an order, said that no passenger train and private or public buses other […]

Bhubaneswar: Four doctors of All India Institute of Medical Sciences (AIIMS)-Bhubaneswar have tested positive for coronavirus, an official said on Tuesday. AIIMS Director B. Gitanjali said three Senior Resident Doctors from surgery, pathology and pharmacology departments and a junior doctor from Dermatology Department were tested positive and sent in home quarantine. All of them are […]

Bhubaneswar: All religious places and shopping malls in Odisha will remain shut till June 30 in view of rising Covid-19 cases. “All religious places/places of worship and shopping malls will remain closed till June 30,” according to a notification issued by the Special Relief Commissioner (SRC), here on Monday. All cinema halls, gymnasiums, swimming pools, entertainment […]

Bhubaneswar: A labourer, who returned from Chennai, spent two days in jungle after allegedly being denied admission to the quarantine centre, and entry to his village, in Odisha’s Ganjam district. After reaching Balasore by train, Barik Nayak was brought to Bhanjanagar by bus, sources said. However, when he reached his village, the local residents did not […]

Bhubaneswar: Coronavirus infection might reach its fourth stage later this month, the Odisha government said, here on Saturday. “In Odisha, Covid-19 infection may reach its 4th stage this month. Maximum infection is apprehended in this month,” said Subroto Bagchi, chief government spokesperson on coronavirus. Urging people to take maximum precaution during this period, he said […]