Vadodara (Gujarat) :  In a bizarre incident, the Gujarat Police on Friday lodged an FIR against an “unknown ghost” in an attempted suicide case of a woman in Vadodara district. The incident was of Chokari village in Padra taluka of Vadodara where a young housewife attempted to commit suicide by pouring kerosene on her body […] 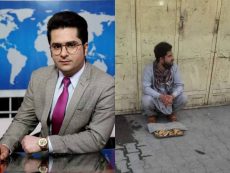 Youth killed in firing in Secunderabad was preparing to join army

Over 50 nurses in Bhopal accuse medical superintendent of sexual harassment