Moscow | The world faces “probably the most dangerous” decade since the end of World War Two, Russian President Vladimir Putin has warned. He made the remarks on Thursday while addressing the annual Valdai forum after a series of recent military defeats in Ukraine and growing public anger at home over a drive to mobilise some […]

Moscow | Russian President Vladimir Putin’s limousine was attacked in an alleged “assassination attempt” amid Moscow’s raging war against Ukraine, a report said. According to the report by General SVR, a Russian Telegram channel, Putin’s limousine was allegedly hit by a “a loud bang from the left front wheel followed by heavy smoke”, but he was […]

Moscow | Russia is already under unprecedented sanctions due to its invasion of Ukraine and now the European Union (EU) could target Alina Kabaeva, a politician, media boss, former Olympic gymnast, and, if the rumours are true, President Vladimir Putin’s girlfriend and mother to some of his children, according to a media report. The sanctions imposed […]

London | A bloated Vladimir Putin has been seen gripping a table whilst slouching in his chair during a televised meeting with his defence minister amid rumours the Russian strongman is battling cancer, the media reported. In a rare live appearance, Putin claimed Russia had ‘liberated’ the besieged Ukrainian city of Mariupol, as he savagely […]

London | Russian President Vladimir Putin bathes in antler blood extracted by painfully hacking off a deer’s horns and is ‘constantly’ accompanied by a doctor specialising in thyroid cancer, reports claim, Daily Mail reported. Putin was introduced to the unusual remedy by now Defence Minister Sergei Shoigu, and apparently enjoyed a soak in a “bathtub containing […]

New Delhi | Foreign Ministers of Russia and the Ukraine — Sergey Lavrov and Dmitry Kuleba–who held their first round of talks in Turkey have discussed the possibility of a summit between Russian President Vladimir Putin and his Ukrainian counterpart Volodymyr Zelensky to end their conflict which has now rumbled into its fifteenth day. The surge […] 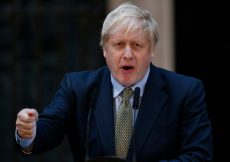 London | UK Prime Minister Boris Johnson has set out a six-point plan to ensure Russia’s defeat in the ongoing war in Ukraine, the media reported on Sunday. Writing in The New York Times, the Prime Minister said that “(Russian President Vladimir) Putin must fail and must be seen to fail in this act of aggression”, […]