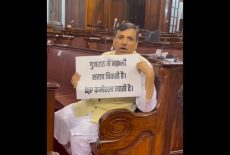 New Delhi | AAP member Sanjay Singh on Wednesday was suspended from the Rajya for a week for disrupting the House proceedings and showing utter disregard to the Chair. With Singh, now 20 members from the opposition have been suspended in the Upper House. The Rajya Sabha was adjourned for 15 minutes. Singh was suspended for […]

Agra | The success of the ‘Tiranga Yatra’ in the Taj city by the Aam Aadmi Party (AAP), which drew thousands of party workers, has had its fallout in an FIR being registered against Delhi Deputy Chief Minister Manish Sisodia, Sanjay Singh and 17 others at the Loha Mandi police station on Monday. FIR has also […] 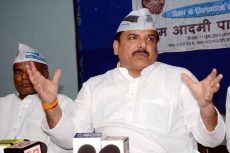 Lucknow | A case has been lodged against Aam Aadmi Party’s Rajya Sabha member, Sanjay Singh, on a complaint filed by a Bharatiya Janata Party (BJP) MLA accusing him of tarnishing his image. Ajay Singh, a BJP legislator from Haraiya assembly seat in Basti district, filed the complaint at Hazratganj police station against Sanjay Singh, accusing […] 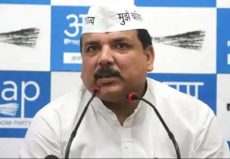 Lucknow | The Aam Aadmi Party (AAP) in Uttar Pradesh will start door-to-door campaigning for panchayat elections to build up its brand in the hinterlands. According to AAP MP Sanjay Singh, “We had declared our first list of candidates on the day the court struck down the state’s reservation policy. So now that will have to […] 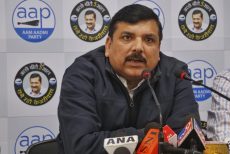 New Delhi: In a relief to Aam Aadmi Party’s Rajya Sabha member Sanjay Singh Singh, the Supreme Court on Tuesday granted him protection against arrest in all FIRs registered against him in Uttar Pradesh. The Supreme Court also issued notice on his plea for clubbing of all FIRs. Singh has cited eight FIRs filed in Lucknow, […]

New Delhi: Aam Aadmi Party leader and Rajya Sabha MP Sanjay Singh on Tuesday did not get immediate relief from the Supreme Court in a matter pertaining to non-bailable warrant (NBW) issued in connection with an FIR lodged in Lucknow. The case was registered after his press conference on August 12 last year, where he alleged […] 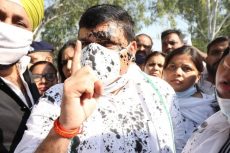 Hathras (Uttar Pradesh): Members of the ‘Savarn Samaj’ (or the upper caste) threw ink at Aam Aadmi Party (AAP) MP Sanjay Singh when he was on his way to meet the family of the Hathras victim. The police have arrested one Deepak Sharma who belong to the ‘Savarn Samaj’ group. The accused was reportedly shouting slogans […]

Lucknow: Three FIRs have been registered in different districts over the past two days against Aam Aadmi Party (AAP) MP Sanjay Singh. Singh has been booked for accusing the UP government of being “pro-Thakur” and insulting the Dalits by not inviting President Ram Nath Kovind to the foundation stone laying ceremony of Ram Janmabhoomi temple […]