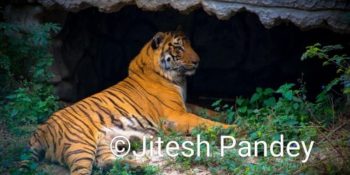 Ranthambore : Much like a Hollywood Walk of Fame, every feline inhabiting this royal forest in Rajasthan comes across as a distinct character with a personality of its own. And in these times with their dwindling numbers, they seem well aware of their stardom and the attraction they have for numerous visitors frequenting the Ranthambore National Park.

Drawing thousands of visitors even in the scorching heat of the summer, the tigers of Ranthambore show up and pose for cameras. For wildlife photographers, the tigers here are the real showstoppers — the undisputed kings of the national park spread across a staggering 1,113 sq kms.

Full of ecstasy and anticipation, I embarked on “The Great Indian Safari Ride”, organised by Columbia Sportswear, to unravel this unparalleled universe of tigers. Columbia’s gear that uses some Omni Wick and Shade technology, thankfully kept me dry and surprisingly cool even when the surrounding areas were under the grip of severe heat waves. And the herald of the safari ride marked the onset of the joy of jungle.

It was almost 5 pm, when Krishna came out of a water pit, overlooking nine lucky people from different walks of life, observing her movement from a 50 metre-high cliff after a much deserved waiting of half-an-hour.

We were particularly lucky because in just two safaris we spotted five tigers — mighty Kumbha (T34) who now walks through the area once ruled by famous Ustad (T-24), the naughty Arrowhead (T 84) , the royal lady Krishna (T-19) daughter of “queen-mother” Machli (T-16) — the longest surviving tigress, and Krishna’s two cubs whom she is grooming to be a survivor as forest congests.

For a wildlife enthusiast, the names associated with them are exhilarating. Just sit by a forester who knows this forest and its magnificent masters and time will flow like golden Rajasthan sand slips out of your hand.

The mesmerising legends — how Arrowhead inherited skills to dominate lakes driving off her siblings from area; why Ustad was imprisoned and taken away from his first-love Noor (T-39) bringing a love story to an end; their young romance had given Ranthambore its Sultan (T-72) their first child who was raised to be another gem in the crown; entry of magnificent male T-57 into the life of mourning Noor; and the famous battle of Machli and a 14-foot-long crocodile — the tales born in this world never cease to amaze.

So in search of our own tales to tell, we were in the evening Safari when Krishna walked out of famous water pit “Lami ka Nala” covered with Jamun trees, sat in a grassland with grey Ranthambore canopy in background, brushed her back and gave some great poses before resting.

As the guide anticipated, her cub followed in another half an hour. Approaching her mama in stealth mode, the cub sneaked even as Krishna remained unaware, held a position and then jumped on her mother to surprise and show her how well he had learnt.

“He is very Natkhat and Mastibaaj (naughty and fun frolic), the other (cub) one is conserved,” said the guide, as the one year old cuddled and then nudged Krishna to play.

The mother was perhaps not in mood, so this one scoots and crawls on back a little, then wait for his brother to join. The serious brother however passes from distance. As this happens, at some distance a pair of Bulbul was hushing away a mongoose trying to steal their eggs.

On our way back, the Arrowhead was seen marking her territory. Famous for not leaving any stone unturned when it comes to the show, on our way in, Arrowhead, came out of pit after a brief cool off, did some stretching and tried to hunt down a Sambhar deer. She could not make the kill and hours later would make another attempt, and that’s how we got to see how even tigers fail to do something they are best at.

Ranthambore changes four colours, from green to copper in winters and then brown to grey in summers, wildlife is visible and audible due to its typical Aravali deciduous terrain dominated by Dhok trees.

Here, watching a monitor lizard and a flameback woodpecker sipping from a pond with five visible crocodiles, is not a rare spotting. However, it will always take an eye. Personally, I believe in luck and fortunately I had been lucky when it comes to spotting the wild. This safari, no doubt, took my luck to a different level.

It literally brought me closer to tiger, when Kumbha passed merely a meter away from me. I could have bent and touched it. I did not, because I had to live and write about it.

It was in the morning, when we followed Kumbha in zone-6, near a water pit. All jeeps lined up, mine was the nearest to his route. As Kumbha approached, he gave a warning call to clear of the area, and walked towards the old fortress gates.

Still young at heart and one of the oldest survivor of Ranthambore, Kumbha who once paired up with tigress T-61 and T-58 at opposite ends of his zone-6, is currently in a relation with Ladli (T-8) and at the age of 10 is father of two cubs.

To their millions of followers across world, these majesties are characters with very individualistic personalities. To me, they are a life devoting reason and their conservation in a jungle which once was a royal hunting ground, is a way to prove that we are up to some good.