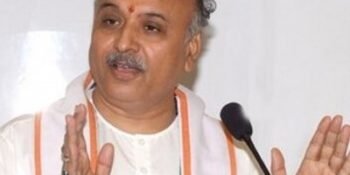 Ahmedabad, Jan 16 : The Ahmedabad Crime Branch on Monday said it had constituted a special team to look for Acting President of the Vishwa Hindu Parishad Pravin Toghadia who suddenly went missing amid allegations that the Rajasthan Police took away the Hindu leader.

The Rashtriya Swayamsevak Sangh (RSS), the umbrella body of all saffron outfits, in a one-line statement late on Monday expressed concern over the “goings-on around Toghadia” and hoped the state government and the police would initiate immediate action.

The Ahmedabad and Rajasthan police both later denied that the VHP leader, once known to be close to Prime Minister Narendra Modi, had been arrested, while the former said it would search for Toghadia if he had gone missing.

It all began on Monday morning, 10 days after the Hindu leader had alleged that a “higher up in the BJP” was trying to implicate him in a murder case, when the VHP activists stormed the Sola police station in Ahmedabad alleging that Toghadia was missing and that he had been taken away by Rajasthan Police.

Around 50 Vishwa Hindu Parishad workers created ruckus at the police station, alleging that the police, in connivance with their Rajasthan counterparts, had taken Togadia into custody in connection with a 10-year-old murder case.

They claimed that the Sola police helped the Rajasthan Police arrest the VHP’s President from Paldi area in Ahmedabad, the workers demanded to know his whereabouts.

“We are pretty sure the Rajasthan Police has arrested our leader. They were in the state searching for Togadia in connection with the murder in Rajasthan that took place 10 years ago.

“We ask the Gujarat Police to tell us where he is if he has not been arrested,” said Raju Patel, the Ahmedabad city VHP General Secretary. “We fear that Toghadia might be killed by the police in a fake encounter.”

The VHP workers tried to block traffic on the busy Sarkhej-Gandhinagar highway in western Ahmedabad.

Meanwhile, the Ahmedabad and the Rajasthan police admitted that police indeed arrived here from the neighbouring state but maintained that they left the city without making any arrest.

Superintendent of Police from Sawai Madhopur district in Rajasthan Maman Singh told the media that the police from his state were in Ahmedabad to look for Toghadia in case relating to violation of Section 144 under 188 of the Indian Penal Code of 2001 in Gangapur city but returned empty-handed.

Ahmedabad Crime Branch’s Joint Commissioner of Police J.K. Bhatt said that “it is a not major case. The Sola Police accompanied their counterparts from Ganganagar who had come with an arrest warrant from a local court to Bhagwat Bungalows. But he was not there at his home and the police returned.”

Bhatt said despite this a special team had been constituted to search for Toghadia.

“The CCTV footage around his (Toghadia’s) and office were being checked and he would be traced soon,” Bhatt said.

Asked how could the powerful Hindu leader go missing despite being provided with a Z-plus security cover, the police officer replied, “He (Toghadia) had asked the guards to let him rest since it was late night then and come back the next afternoon.”

Bhatt said a police constable Vikram Singh had claimed to have been the VHP leader around 11 a.m. going out with someone in autorickshaw. He added that all aspects were being investigated.

On January 5, Toghadia alleged a conspiracy had been hatched against him by a “higher up in the BJP” to implicate and jail him in a 1996 murder case by ensuring he did not get the summons issued against him.

The Metropolitan Court on Friday cancelled a non-bailable warrant issued against Toghadia, once a powerful figure in the Hindutva camp.