New Delhi : A day after two medical students were killed in an accident on the newly-constructed Signature Bridge here, a man died on Saturday after his bike skid and he hit the divider head-on, police said. The deceased was identified as Shankar, 24, a resident of Ghaziabad in Uttar Pradesh. “Shankar with his cousin […] 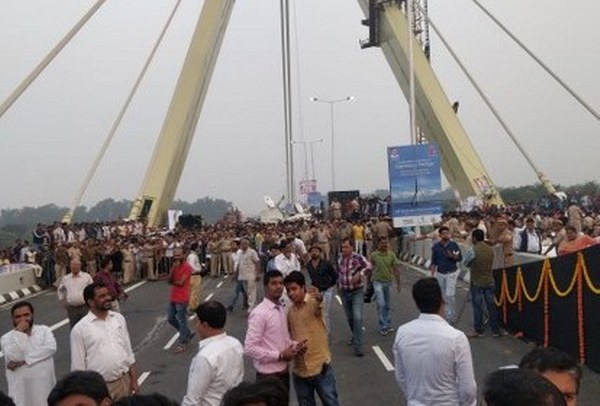 New Delhi : Two men on a motorcycle were killed on Friday at the new Signature Bridge here after ramming into a divider and falling into the river, police said. The bikers fell 30 feet off the Signature bridge over the Yamuna in Northwest Delhi. The incident occurred at 8.40 a.m. on the bridge’s left […]

New Delhi :  Four eunuchs were arrested here on Thursday for dancing naked on the Signature Bridge. A case of obscenity at public place was registered against them on Wednesday after a video showing them dancing went viral on social media. “We have arrested them,” Deputy Commissioner of Police A.K. Thakur said, adding that an […]

New Delhi : The Delhi Police on Saturday booked Chief Minister Arvind Kejriwal, AAP MLA Amanatullah Khan, and BJP’s Delhi chief Manoj Tiwari in connection with the scuffle at the inauguration of the Signature Bridge here, police said. Two FIRs including one against Khan was registered on the complaint of B.N. Jha, a BJP worker […]

New Delhi : Delhi BJP President Manoj Tiwari on Sunday accused AAP legislator Amanatullah Khan and his party workers of manhandling him at the Signature Bridge inauguration site and described it as “unfortunate”. While some media reports accused Tiwari of punching a policeman, he denied the charge. Tiwari said he had gone to the event […]

New Delhi : Ahead of the inauguration of the Signature Bridge over the Yamuna, BJP and AAP activists clashed here on Sunday, with Delhi BJP chief Manoj Tiwari attacking AAP workers and punching a policeman who intervened. Tiwari, also a Lok Sabha member, got into a scuffle with Aam Aadmi Party (AAP) workers before the […]