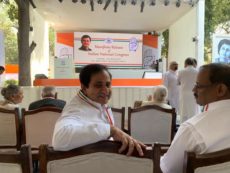 Patna: Congress leader and former Union Minister Shakeel Ahmad on Monday said he will contest the Lok Sabha elections as an Independent candidate from Bihar’s Madhubani seat. Ahmad, who was unhappy after his traditional seat of Madhubani went to ally VIP under a seat sharing formula of the Grand Alliance, said he will file his […]

New Delhi :  In the wake of announcement of election results in three northeast states, Congress leader Shakeel Ahmad on Saturday said the Bharatiya Janata Party (BJP) is “losing ground” in all direct battles against his party.   “It appears the political equations are changing rapidly. the BJP is losing ground wherever they are pitted […]