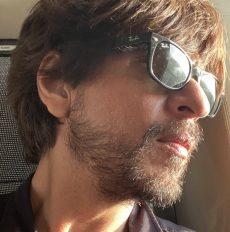 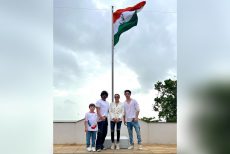 Mumbai | As the country prepares for its 75th Independence Day, Bollywood superstar Shah Rukh Khan, joined by his family, hoisted the Tricolour at his residence here on Sunday. It was an expression of his support for the nationwide ‘Har Ghar Tiranga’ campaign. It is an initiative of the central government to get all Indians to […]

Mumbai | The controversy surrounding the new tobacco advertisement featuring Bollywood superstars Shah Rukh Khan, Ajay Devgn and Akshay Kumar is not dying down. After Akshay Kumar’s public apology and Ajay Devgn’s defence on his “personal choice” of starring in a tobacco brand’s elaichi product ad, an IAS officer from West Bengal has come down heavily […] 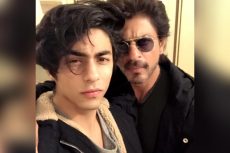 Mumbai | In a new bombshell, a witness in the cruise ship rave party raid case has accused the Narcotics Control Bureau (NCB) of allegedly demanding bribes from Bollywood megastar Shah Rukh Khan to release his son Aryan Khan, here on Sunday. The witness, Prabhakar Sail, openly stated on various TV channels that he feared a […]

Mumbai | Bollywood megastar Shah Rukh Khan on Thursday morning went to meet his son Aryan, currently lodged in a barrack with other criminals at the Arthur Road Central Jail (ARCJ), after his detention and arrest by the NCB in a drugs case. The pony-tailed senior Khan sporting dark shades and a black facemask over a […] Mumbai | In a major development, teams of Narcotics Control Bureau (NCB) paid a formal ‘visit’ to the residences of Bollywood megastar Shah Rukh Khan in Bandra west, and actress Ananya Panday in Khar west, and raided a location in Andheri on Thursday as part of the ongoing probe into the October 2 luxury cruiser […] 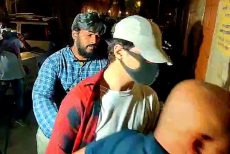 Mumbai | Shah Rukh Khan’s son Aryan Khan was detained by the Narcotics Control Bureau (NCB) during a raid conducted on a cruise ship on October 3. Following which the Bollywood superstar’s manager Pooja Dadlani has been reportedly acting as an intermediary between Aryan and the Khan family. Shah Rukh and his wife Gauri have not […] 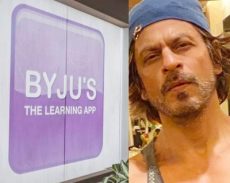 Mumbai | In a plot straight out of the all-time favourite American comic book “Richie Rich”, the poor rich Aryan Khan has reportedly told the Narcotics Control Bureau sleuths that his father and mega-star Shah Rukh Khan remains so busy that occasionally, he needs an appointment just to meet him. Ironically, life became a full circle […]