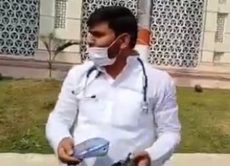 Patna: A day after Nitish Kumar attacked Rashtriya Janata Dal MLC Subodh Rai in the Legislative Council, party MLA Mukesh Raushan posed as doctor on Tuesday with stethoscope and Blood Pressure (BP) meter in the Vidhan Sabha to register his protest. When reporters asked Raushan about his getup, the MLA said: “Our chief minister frequently loosing […] 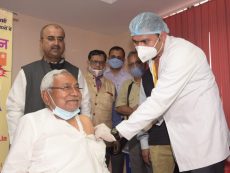 Patna: After frontline health workers and Corona warriors, a vaccination drive for those aged above 60 and those above 45 with co-morbidities began in Bihar on Monday. The first person to receive the vaccination at the Indira Gandhi Institute of Medical Science (IGIMS) in Patna on Monday afternoon was Chief Minister Nitish Kumar himself. Health minister […] 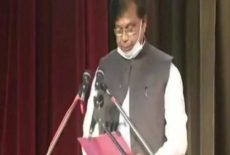 Patna: JDU leader Mewalal Choudhary, allegedly facing corruption charges in the recruitment of assistant professors and scientists, has become Bihar’s new education minister in the newly formed government. The move is turning out to be a self-goal for Chief Minister Nitish Kumar and the NDA, too, appears to be on the backfoot. They are keeping mum […] Patna: Bihar Governor Phagu Chauhan on Sunday invited Nitish Kumar to form the new government in Bihar after the latter went to the Raj Bhavan here to present a list of 125 NDA MLAs and stake his claim. Nitish Kumar is expected to take oath around 4.30 pm on Monday. The NDA leader said that he […] 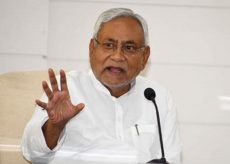 Purnea (Bihar): With the campaigning for the third and last phase of Bihar Assembly elections concluding on Thursday, Chief Minister Nitish Kumar made a big announcement saying it was his last election. Addressing an election rally in Purnea’s Dhamdaha, Nitish said: “Today is the last day of campaigning. Voting is due day after tomorrow and this […]

Patna: Bihar Chief Minister Nitish Kumar is facing huge criticism for allotment of a poll ticket to tainted leader Manju Verma, a co-accused in the Muzaffarpur girls shelter home case. Verma managed to bag seat from Cheria Bariyarpur constituency in Begusarai district. She is facing charges of criminal conspiracy along with her husband and having links […] 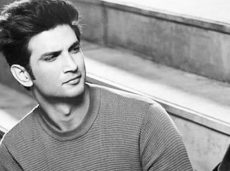 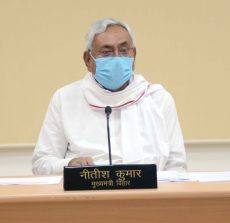 Patna: Bihar Chief Minister Nitish Kumar has expressed his displeasure over the way Bihar Police IPS officer Vinay Tiwari, who is in Mumbai to probe Sushant Singh death case, was treated by the Mumbai Police. Tiwari was forcibly quarantined upon arrival in Mumbai by Brihanmumbai Municipal Corporation officials. The Chief Minister said whatever happened with Tiwari […]

Patna: Bihar has registered a steady increase in the number of coronavirus cases recently, which have now reached the doors of the chief minister. Chief Minister Nitish Kumar’s niece has been found to be corona infected. According to sources, she was admitted to Patna AIIMS on Monday after getting infected with the virus. After this, the […]