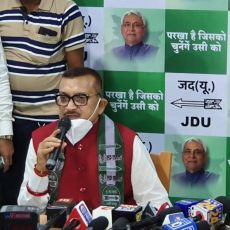 Patna: Bihar’s former DGP Gupteshwar Pandey, who was tipped to contest the October-November Assembly election on a Janata Dal-United ticket, does not figure in the list of 115 candidates released by the state’s ruling party on Wednesday. It was being speculated that Pandey, who hails from Buxar, could be fielded from there. However, the seat has […]

Patna: Bihar’s former Director General of Police Gupteshwar Pandey on Sunday joined the state’s ruling Janata Dal-United (JD-U). Pandey, who had taken voluntary retirement from the Indian Police Service a few days back, said that Chief Minister Nitish Kumar had called him at his residence in the morning and asked him to join the party. He […] Mumbai: As the CBI got cracking on the Sushant Singh Rajput death probe here, political barbs continued to fly in Maharashtra on Friday, with Housing Minister Jitendra Awhad predicting that Bihar DGP Gupteshwar Pandey would be the next home minister of his state’s new government. “Just in case Nitish Kumar returns as the Chief Minister, […] 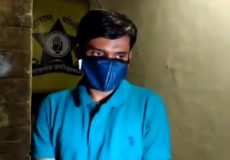 Patna: Expressing his displeasure over what he called non-cooperation of Mumbai Police in the Sushant Singh Rajput death case, Bihar DGP Gupteshwar Pandey claimed that IPS officer Vinay Tiwari was put under house arrest in Mumbai on the pretext of quarantine. Tiwari was ‘quarantined’ by the BrihanMumbai Municipal Corporation on Sunday night after he arrived in […]