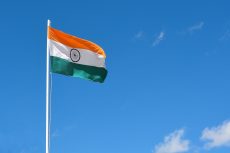 Srinagar | As part of the celebrations to mark the 75 years of Independence, a 100 ft tall National Flag was dedicated to the nation at Gulmarg in Jammu and Kashmir in a modest ceremony on Tuesday, officials said. The ceremony was presided over by Lt. Gen. Y.K. Joshi, Army Commander Northern Command. He also honoured […]

Srinagar: At minus 11.9 and minus 5.2 degree Celsius as the night’s lowest temperatures on Friday, Leh town and Gulmarg were the coldest places in Ladakh and Jammu and Kashmir, respectively. The mercury dropped to a bone-chilling minus 11.9 degree Celsius on Friday in Leh town of Ladakh region while the famous ski resort, Gulmarg of […] New Delhi: An Indian Army jawan remains untraceable after he slipped in the snow during routine patrolling and Line of Control dominating exercise in Gulmarg sector of Jammu and Kashmir, Indian Army said on Monday. It said rescue operation is still on to trace the missing jawan. The jawan is identified as Havildar Rajendra Singh Negi, […]