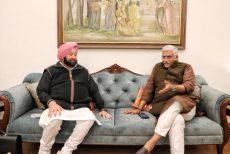 Chandigarh | Punjab Lok Congress (PLC) chief Amarinder Singh on Friday announced his party’s alliance with the BJP for the 2022 Assembly polls in Punjab. “Met union minister & @BJP4India incharge for Punjab, Shri @gssjodhpur in New Delhi today to chalk out future course of action ahead of the Punjab Vidhan Sabha elections. We have formally […]

This image tweeted by @RT_Media_Capt

Chandigarh | Former Punjab Chief Minister Amarinder Singh on Wednesday announced the launch of his own political party, ahead of the Assembly elections slated for early next year. However, he said the name of the party, which could have an alliance with the BJP, would be announced later after consulting the Election Commission of India. Amarinder […]

Chandigarh | Former Punjab Chief Minister Amarinder Singh may announce the launch of his own political party on Wednesday. An indication in this regard came on Tuesday when his media advisor Raveen Thukral extended an invite to the media for Amarinder Singh’s press briefing in Chandigarh. Formally saying goodbye to the Congress which made him the […]

New Delhi | Scotching speculation to the contrary, former Punjab Chief Minister Captain Amarinder Singh on Thursday made it clear he was not joining the Bharatiya Janata Party (BJP) but had no intention of continuing in the Congress either, which he said was going downhill with senior leaders completely ignored and not given a voice. Denying […] 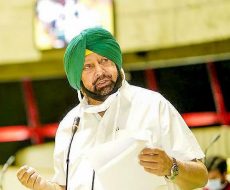 New Delhi | Former Punjab Chief Minister Amarinder Singh is likely to quit Congress, sources say adding that he is not likely to join the BJP amid talks of change of camp. The Congress in a last ditch attempt have roped in senior leaders to talk to Amarinder Singh and persuade him not to join the […]