Mumbai: Maharashtra bid a tearful adieu to Captain Deepak V. Sathe — the pilot who was killed in the Air India Express plane crash in Kozhikode last Friday — at his funeral performed with full state honours here on Tuesday afternoon. In the morning, Sathe’s mortal remains were brought from the Bhabha Hospital, Bandra, by his […] 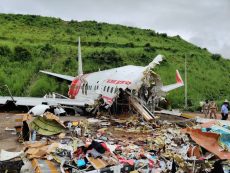 New Delhi: Precious lives have been lost in the Air India Express runway mishap on Friday evening, but the Ministry of Civil Aviation, the Director General of Civil Aviation (DGCA) and the Airports Authority of India (AAI) had been alerted about the dangers associated with the runway of the Kozhikode airport as far back as […] 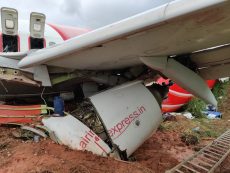 Chennai: A deadly combination of a slippery runway, strong tailwind, bad weather conditions, and landing ahead of the threshold spot could have resulted in the skidding of the ill-fated Air India Express in Kozhikode that claimed 18 lives, two aviation experts said on Saturday. As for the “failure of the aircraft’s landing gear” and consequently […] 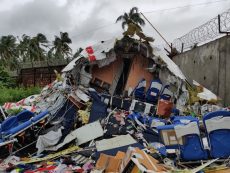 Chennai: Air India Express on Saturday said it is adequately insured and would pay the compensation in accordance with applicable law at appropriate time after its Dubai-Kozhikode flight crashed at Kozhikode airport a day ago. The airline also announced immediate financial relief to the families of those who died in the accident and to those […] 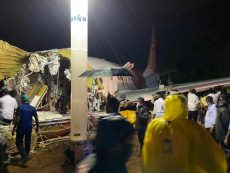 Kozhikode: A team of the Directorate General of Civil Aviation (DGCA) investigating the crash of Air India Express aircraft at the Kozhikode airport recovered its black box on Saturday, officials said. The black box records the conversation between the pilots as well as with the air traffic control tower, apart from the flight data. The […] 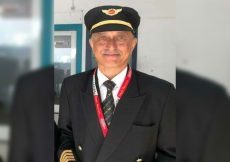 Kochi: I have lost a good friend who was a great human being and a pilot par excellence, says retired naval commander Sam T.Samuel recalling Deepak Vasant Sathe, the pilot of the ill-fated Air India Express flight that crashed killing 18 on board including the two pilots. Sathe lost his life along with 17 others […]

New Delhi: Captain Deepak V. Sathe, who was among those killed when the Air India Express plane he was piloting crashed in Kerala’s Kozhikode on Friday, was a former Indian Air Force officer, who flew the MiG-21 fighter aircraft with 17 Squadron (Golden Arrows) in Ambala. The squadron saw action in the 1999 Kargil war and […] 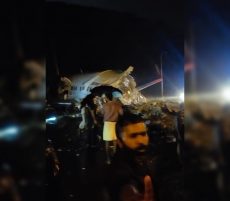 Kozhikode: An Air India Express flight arriving from Dubai skidded off the runway on Friday night and following the impact the aircraft middle portion was wide open. Local legislator T.V. Ibrahim said that he is at the local hospital near the airport where he has seen two bodies while around 50 injured people have been […]

New Delhi: An Air India Express flight from Dubai skidded-off the runway after landing at Kerala’s Kozhikode and plunged deep into a valley, where it broke into two pieces, the DGCA said. The aircraft, which had a total of 191 people onboard, battled heavy rains while landing. According to the Directorate General of Civil Aviation, […]

New Delhi/Kozhikode: An Air India Express aircraft skidded off the runway while landing in Kozhikode and plunged into the deep valley below. At least 11 people have reportedly died in the accident, including the pilot of the flight, D.V. Sathe. The incident occurred at 7.41 p.m. on Friday, when the flight from Dubai to Kozhikode skidded […]