New Delhi: Congress leader Rahul Gandhi in his series of interaction with economic leaders have now spoken to Nobel laureate Abhijeet Banerjee who has suggested that people should be given money directly if the government wish to revive the economy fast. There should be Aadhaar-based PDS or a temporary ration card so that those who […] 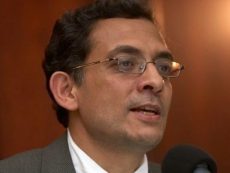 Kolkata: The talk from the “fringes of the ruling party” about the demographics of the Muslim population is just a way to ‘demonise’ a community, Nobel Laureate Abhijit Banerjee said here, asserting that there is no real fear of Muslim takeover in India. “India and the US are similar in one very important way. The […]

Kolkata: Nobel laureate Abhijit Vinayak Banerjee on Monday said that while there is nothing in the macroeconomic data that says India couldn’t be in a recession, the final answer was unknown to him in the absence of new, reliable data on the informal sector where the anecdote suggests “the big slowdown is in”. “If you ask […]

Stockholm: Indian-American economist Abhijit Vinayak Banerjee, and his French-American wife Esther Duflo were conferred the Nobel Prize for Economics in Sweden here, alongside their American colleague Michael Kremer. Unlike other laureates, who arrived in tuxedos and fancy Red Carpet dresses, the couple glorified the prestigious occasion in traditional Indian attire. Abhijit wore a black bandhgala […] 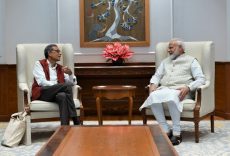 New Delhi: Prime Minister Narendra Modi on Tuesday met Nobel laureate Abhijit Banerjee and said, “India is proud of his accomplishments”. Excellent meeting with Nobel Laureate Abhijit Banerjee. His passion towards human empowerment is clearly visible. We had a healthy and extensive interaction on various subjects. India is proud of his accomplishments. Wishing him the […]

New Delhi: Nobel laureate Abhijit Banerjee has said that Finance Minister Nirmala Sitharaman was his contemporary in Jawaharlal Nehru University (JNU) and the both stood on “similar” lines on “certain” issues during their academic years in the university. Speaking in a television interview, he said that it was not as if the two had deep disagreements. […] 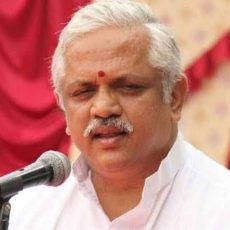 Boston: Fifty-eight-year old Indian American Abhijit Banerjee is the toast of MIT Sloan and India by becoming the sixth Kolkatan to win a Nobel Prize. Banerjee, his wife and one-time Ph.D student Esther Duflo, and Harvard professor Michael Kremer were awarded the 2019 Nobel Prize in Economics for their work which has “dramatically improved our ability […] 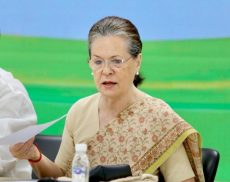 New Delhi: The Congress top brass on Monday congratulated the trio of Abhijit Banerjee, Esther Duflo and Michael Kramer upon receiving the Nobel Prize in Economic Sciences. Born in 1961 in Mumbai, Bannerjee is a Ph.D. from Harvard University and a professor of economics at the Massachusetts Institute of Technology (MIT). Extending her wishes to […] 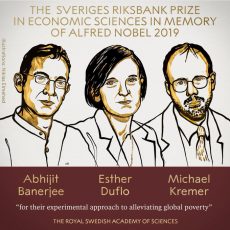 Stockholm:  The 2019 Sveriges Riksbank Prize in Economic Sciences has been awarded to Indian-origin MIT professor Abhijit Banerjee, Esther Duflo and Michael Kremer “for their experimental approach to alleviating global poverty”, it was announced on Monday. Banerjee was born in 1961 in Mumbai. He is a Ph.D. from Harvard University and a Professor of Economics at […]