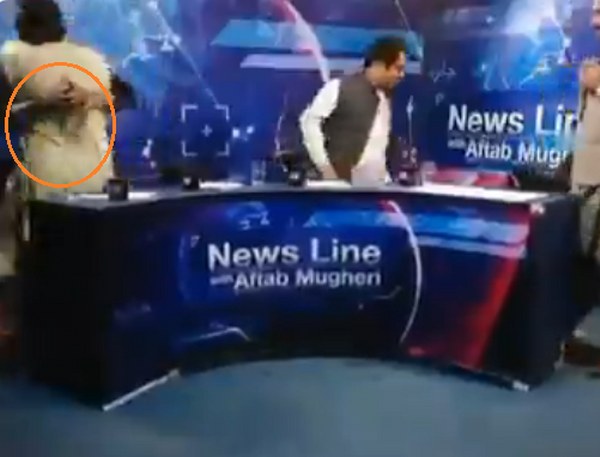 Islamabad: A live news debate on a Pakistani news channel turned ugly after an argument between a politician and a journalist turned physical, shocking viewers across the country.

Masroor Ali Siyal, a leader from the ruling Pakistan Tehreek-e-Insaf (PTI) party, and Karachi Press Club President Imtiaz Khan were among the panelists on the show “News Line with Aftab Mugheri”.

In a video apparently shared by the journalist, Siyal is heard warning Khan about his tone and tenor.

Khan replies in a high-pitched voice that he too won’t tolerate any nonsense.

Within a split of a second, Siyal gets up and violently pushes Khan from the chair. And then, in a fit of rage, he clutches Khan with his arms — like in a wrestling bout — and apparently hurls blows at him.

Both shout and swear at each other, shocking the moderator while other studio employees rush to separate the two.

Siyal returns to his chair while Khan walks out of the studio. After some minutes, Khan returns to the show and again sits next to Siyal, warning the PTI leader of legal consequences over the incident.

The video has become a rage on Twitter and within hours had been viewed by 99,000 people. Many trolled the politician over his conduct on a live TV show, and one tweet referred to the incident as an outcome of “Naya Pakistan”.