Bhubaneswar : A mob of hundreds of men and women ransacked and set ablaze a police station in Odisha’s Sambalpur district on Friday to protest the custodial death of a theft accused.

The irate mob damaged property at the Ainthapali police station, vandalised several vehicles and attacked the personnel by pelting stones at them, besides torching the police station.

The incident took place after a tribal youth, Abinash Munda of Bhalupali village, arrested in connection with a theft case, allegedly hanged himself to death inside the police station on Thursday night.

Munda’s family alleged that torture by the police led to his suicide.

Several policemen were injured in the attack, a police officer said.

The inspector-in-charge of the Ainthapali station, a sentry, and the diary-charge officer (DCO) have been suspended for their negligence.

Strong departmental action would be initiated against all responsible, Sharma said. 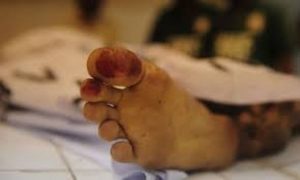