Chennai | Condemning a “lewd and inappropriate remark” by actor Siddharth against badminton player Saina Nehwal on Twitter, the National Commission for Women (NCW) on Monday sought “prompt and strict action” against the actor for using indecent language for women on social media.

No nation can claim itself to be safe if the security of its own PM gets compromised. I condemn, in the strongest words possible, the cowardly attack on PM Modi by anarchists.#BharatStandsWithModi #PMModi

In a statement issued by the NCW, which was shared by its chairperson Rekha Sharma on Twitter, the commission said that it had come across a post of actor Siddhart using lewd comments on Twitter on the post of Saina Nehwal.

The NCW termed Sidharth’s tweet as being “misogynist and outrageous to the modesty of a woman amounting to disrespect and insult to dignity of women on social media platform. (sic)”

Subtle cock champion of the world… Thank God we have protectors of India. 🙏🏽

Shame on you #Rihanna https://t.co/FpIJjl1Gxz

Stating that it had taken suo moto cognisance of the issue, the commission said that its chairperson Rekha Sharma had written to the Director General of Police, Maharashtra to investigate the matter and register an FIR under the relevant provisions of law.

Subtle cock champion of the world… Thank God we have protectors of India. 🙏🏽

Shame on you #Rihanna https://t.co/FpIJjl1Gxz

Rekha Sharma has also written to Twitter India’s Resident Grievance Officer, asking the social media platform to immediately block Siddharth’s account and take appropriate action against him for posting offensive remarks on Nehwal’s post, thereby “outraging her modesty and insulting her right to live with dignity.” 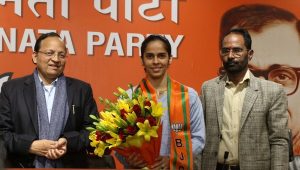