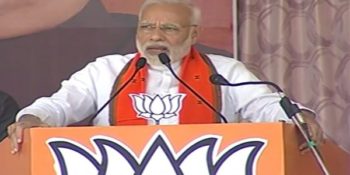 Mahasamund (Chhattisgarh) : Accusing the Congress of hindering Chhattisgarhs development and defrauding India, Prime Minister Narendra Modi on Sunday urged people to vote the the BJP to power for a fourth straight term in the state.

Addressing an election rally here on the last day of campaigning for the second phase of Assembly polls, Modi attacked the Congress for “lying, misleading and defrauding” the country for 50 years and “destroying” four generations of people through their misrule.

In his nearly 45-minute speech, Modi dedicated most of his time attacking the Congress and the Nehru-Gandhi family and elaborated how his government, since 2014, has ushered in all-round development across the country.

Ridiculing the erstwhile Manmohan Singh-led UPA regime as a “remote controlled government”, Modi said Raman Singh’s BJP government, ruling the state since 2003, could do real work only after the BJP took power at the Centre in 2014.

“The first 10 years of Raman Singh government were spent fighting the negative forces. The remote-controlled government in Delhi did not allow Raman Singh to work for his state. It was only after 2014 that he could work to bring in development in the state.”

Comparing Chhattisgarh to an 18-year-old adult, Modi said the Assembly elections were no ordinary polls.

“Do you want to give an opportunity to people who ruined the lives of earlier generations of the state?” asked Modi, warning the people against voting for the Congress. The BJP, he said, was the answer for Chhattisgarh’s progress.

Referring to Congress President Rahul Gandhi’s pledge to waive farm loans if his party came to power in the state, Modi said the Congress’ days of getting votes by “lying and misleading people” were over.

“It has been almost a year since your party came to power in Karnataka but what happened to your promise of waiving loans of farmers?”

The Prime Minister denied that his government waived Rs 3.5 lakh crore of corporate loans of a handful of industrialists.

“It is them who gave out indiscriminate loans and allowed the banks to be looted. Between 2006 and 2014 they gave out loans equal to the amount that was given after independence till 2006. It is our government which dared to enact tough laws and seized billions of rupee worth of properties of the fraudsters who have absconded.”

Modi dared the Congress to select someone capable as party president who does not belong to the Nehru-Gandhi family.

As many as 72 seats spread across 19 districts go to the polls in the second and final phase of Assembly elections on Tuesday. The first phase in 18 seats was held on November 12.