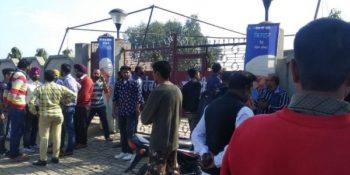 Amritsar : At least three people were killed and 10 others injured when two motorcycle-borne masked youths threw a grenade at a religious congregation in Rajasansi area in Punjab’s Amritsar district on Sunday, police said.

The grenade attack took place on the campus of the Nirankari sect in Adliwal village, about 15 km from Amritsar.

The injured were rushed to hospitals in Amritsar.

All victims were sect followers from nearby villages who had gathered for the Sunday weekly religious meeting.

Witnesses told the police that two youths on a motorcycle, their faces covered, forced entry to the sect campus by pointing a pistol at a woman volunteer at the gate.

‘Everything happened within a couple of minutes. They got in, threw the grenade and fled,” one man told the police.

The attack came amid a high alert issued on November 14 by the Punjab Police regarding the movement of 6-7 terrorists in the state.