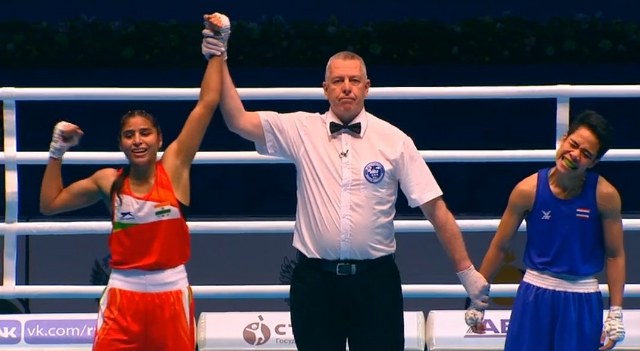 Ulan-Ude (Russia): Indian pugilist Manju Rani on Saturday assured a silver medal for India in the ongoing Women’s World Boxing Championships by entering the final in the 48-kg weight category.

Rani, who has taken over the 48kg mantle from six-time champion Mary Kom, defeated Thailand’s Chuthamat Raksat in the semi-finals with a split 4:1 verdict.

The Haryana girl started off slowly and was seen defending in the first round of the bout. However, she changed gears in the next two rounds and came out with timely punches to emerge victorious.

Sixth-seed Rani, who is competing in her first Worlds tournament, had beaten top seed Kim Hyang Mi of North Korea 4-1 to confirm a medal in the tournament.

She will face Russia’s second seed Ekaterina Paltceva in the summit clash on Sunday.

Earlier in the day, Mary Kom had to settle for a bronze medal after losing her semi-final bout of the 51-kg flyweight category to second-seed Busenaz Cakiroglu of Turkey in a split 1:4 verdict.