Srinagar : Police on Thursday said it has arrested four Kashmiri militants who helped a Pakistani terrorist break free from a Srinagar hospital even as a special investigation team was formed to probe the “criminal conspiracy” behind the dramatic escape.

He said searches were carried out at several places in south Kashmir’s Pulwama and Shopian districts during which the four — two active militants Tika Khan and Kachru and two of their overground workers — were arrested. The four arrested were paraded before the media.

The LeT terrorist escaped after militants, in broad daylight, attacked and killed two policemen escorting him to Srinagar’s SMHS Hospital.

The police officer said the probe team on the basis of “scientific evidence” could ascertain who were involved in the “criminal conspiracy”.

“They were identified, raids were conducted. We apprehended two terrorists and two overground workers. After their arrest we are left with Naveed and another terrorist (Hilal),” Khan told reporters.

He said the conspirators had initially planned Naveed’s escape from a south Kashmir court in Pulwama but failed.

The police officer said Tika and Kachru had visited Naveed in the Srinagar Central Jail several times on one or the other pretext.

Talking about the escape drama, Khan said the militants came to the hospital on February 8, mingled with people and positioned themselves inside before Naveed was brought there.

“When he (Naveed) entered the casualty department of the hospital, Hilal quietly put a pistol in his pocket from which he opened fire. The CCTV footage shows Naveed running away with the pistol.

“Naveed and Hilal then rode a motorcycle kept ready by the two overground workers to reach their hideout. Tika Khan came in the evening and picked them up from there.”

He said the police raided the house but unfortunately Naveed and Hilal had left by then.

“It is not ‘you could not catch them, they overtook us’. No. Appreciate officers’ efforts who cracked the case in limited time. We could have fired in the hospital but we would have killed civilians. We are police officers not terrorists. We don’t believe in killing innocents, they do.”

He said the case required professional investigation and refused to comment further as that might affect the probe.

Asked whether phones had been used inside the hospital to plan the escape, Khan said: “Yes, phones have been used from within the jail and director general prisons had already started an inquiry.”

Asked why the LeT was so desperate to have Naveed out of prison, he said its leadership has virtually been wiped out in the valley and they wanted him as their new commander.

The car and the motorcycle used in the escape have also been seized. Weapons have been recovered from the arrested militants.

The Superintendent of Srinagar Central Jail has been suspended. The medical staff at the SMHS Hospital has been shifted amid suspicion that they may also be involved in the conspiracy.

Police chief S.P. Vaid earlier admitted that there were gaping holes in the security system that had guaranteed the execution of the conspiracy in the escape of the terrorist.

Meanwhile, pictures of Naveed wielding a weapon along with two other militants have gone viral indicating that he has joined the militant ranks after his escape. 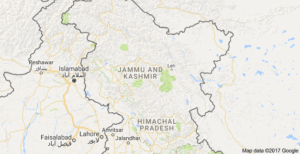