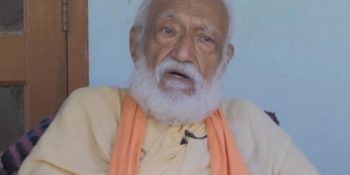 Rishikesh :  Environmentalist G.D. Agarwal, who was on a fast for the last 111 days demanding a clean Ganga, died after a heart attack in Rishikesh on Thursday.

The 86-year old former IIT-Kanpur professor, Agarwal had been on hunger strike since June 22 for a pollution-free and uninterrupted flow in the Ganga.

He had demanded that steps be taken to make the river free-flowing for natural cleansing, and also a ban on construction of all hydroelectric projects along the tributaries of the Ganga besides enactment of the Ganga Protection Management Act.

Agarwal had sent several letters to Prime Minister Narendra Modi, who had in 2014 pledged on the banks of the Ganga in Varanasi that immediate steps would be taken to ensure cleaning of the holy river.

However, the government paid no heed to his demands, said ‘IITians for Holy Ganga’, a forum formed to preserve the heritage and ecology of the river.

Agarwal, who is also know as Swami Gyan Swaroop Sanand, had given up water a couple of days ago after government failed to respond to his satyagraha.

He was moved to the AIIMS, Rishikesh, on October 9 from the protest site.

Activists and politicians criticised the government for not listening to Agarwal.

Calling the BJP government “insensitive”, Aam Aadmi Party (AAP) leader and Rajya Sabha member Sanjay Singh said the BJP, which garnered votes in the name of the Ganga, could not save the son of the Ganga (Agarwal).

In a tweet, he said he had raised the issue in Parliament to save Agarwal.

Senior Supreme Court lawyer and activist Prashant Bhushan criticised the government saying Agarwal was forcibly picked up by the Uttarakhand police and hospitalised.

“He passed away today after his pleas to save the Ganga fell on Modi’s deaf ears. RIP Dear Sir. This world is not for pure souls,” Bhushan tweeted.

Union River Development and Ganga Rejuvenation Minister Nitin Gadkari had in August this year said nearly 70-80 per cent of the cleaning work of the Ganga would be completed by March 2019 and the holy river would become completely clean by 2020.