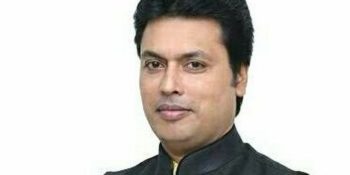 Agartala : All the vital organs of an 11-year-old student who was found brutally murdered in Tripura on Tuesday are intact, Chief Minister Biplab Kumar Deb said on Wednesday, after rumours that the boy’s kidneys were removed led to a clash among villagers and policemen, leaving many injured.

“Class 4 student Purna Biswas was brutally murdered on Tuesday at Mohanpur (in western Tripura) and his body was found near his home late on Tuesday. After the postmortem it was found that all the vital organs of his body including the kidneys are intact,” Deb told the Assembly.

Reports in local media on Wednesday claimed that the boy’s body bore grievous injuries and the kidneys were missing, sending shock waves through the state.

In reply to questions by former Health Minister and CPI-M legislator Tapan Chakraborty, the Chief Minister said: “It was a most painful and heart-rending killing. Police personnel went to the village to help the villagers, but they were attacked by the agitated villagers. Two injured police officials are still in hospital.”

Deb, who also holds the Home portfolio, said that one person was arrested in connection with Tuesday night’s violence.

Education and Law Minister Ratan Lal Nath, who hails from Mohanpur area, said that in his 71-year life, he had never seen such a “brutal killing”, disclosing how there were cuts and fatal injuries on the boy’s lower abdomen and on the waist stretching to the back.

He said that the state government would at any cost resolve the murder and punish the guilty.

“A section of people are trying to disturb the peace and stability of the state. Nobody would be spared and stern action would be taken against those who violate the law.”

A police official said that the officer-in-charge of Sidhai police station Sanjit Sen was among the 15 people, both villagers and police, injured in the clash.

“The mob attacked the police claiming that they (police) reached the spot late. Police also resorted to a baton charge to disperse the mob,” the official said, adding that two suspects were detained in connection with the murder.