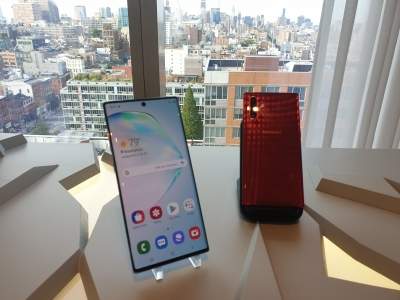 New York (3 MIN READ): Throwing some real challenge to Apple, Google Pixel and Huawei devices in the hyper-competitive premium smartphone segment in India, Samsung on Thursday announced to launch its ‘Made in India’ flagships Galaxy Note10 for Rs 69,999 and Galaxy Note 10+ with a starting price of Rs 79,999 in the country.

The pre-booking for Galaxy Note 10 opened for consumers in India on Thursday and will remain till August 22. Those who pre-booked will get their devices on August 23 which is the global availability date.

According to Tarun Pathak, Associate Director at Counterpoint Research, Samsung has always checked off key specifications needed for a flagship in its Note series and this year too, the company has stayed true to this.

“Over the years, Samsung Note series has managed to generate a loyal user base through its unique positioning revolving around productivity, powerful performance and experience. The S Pen remains at the core of its overall experience,” Pathak told IANS.

Consumers who pre-book Galaxy Note devices using HDFC credit or debit cards will get a cashback of Rs 6,000.

Those who use ICICI credit or debit cards on Flipkart, Amazon, Paytm and Tata CLiQ will also get a cashback of Rs 6,000.

All consumers pre-booking the Galaxy Note10 and Note10+ devices would also be eligible to get the Galaxy Watch Active at Rs 9,999 which currently costs Rs 19,990.

In Galaxy Note10, triple camera at the back has an 16MP ultra wide lens, a 12MP wide angle sensor and a 12MP telephoto lens. The phone houses a 10MP selfie camera.

It also houses a 10MP selfie camera in the middle, which gives both the devices a symmetrical shape unlike the Galaxy S10 series.

The Note10+ has a large 4,300mAh battery with superfast charging technology and the smaller Note device comes with a 3,500mAh battery.

With just 30 minutes of charge, the Galaxy Note10+ may last through the day with up to 45W wired charging capability, claimed the company.

According to Prabhu Ram, Head, Industry Intelligence Group (IIG), CMR, the Note 10 series will definitely appeal to Samsung loyalists and early adopters in the premium segment in India.

“By adopting a multi-tiered device strategy, Samsung has tailored the Note 10 series – essentially a business productivity tool a” to appeal to various consumer personas at the modern workplace: whether it be the CXOs or independent creative professionals,” Ram told IANS.

When it comes to the S Pen, it has some cool features this time like gesture navigation. Air actions allow users to control certain aspects of the device using gestures with the S Pen.

With 3D Scanner — a groundbreaking first for the Note — the DepthVision camera on Galaxy Note10+ can take a scan of an object , and instantly turn it into a movable 3D rendering.