Bhopal: Senior Congress leader Digvijaya Singh was embroiled in a fresh controversy after he said here that some people wearing saffron robes are involved in rape cases. The BJP has taken strong exception to Singh’s statement.

Singh was speaking at a convention of sadhus in Bhopal on Tuesday where he said, “In saffron robes, people are selling churan (a kind of powder), rapes are happening in saffron attire, rapes are taking place even in temples. Is this our Sanatan Dharma? Even God will not forgive those who are involved in these types of activities.”

The BJP reacted strongly to this. Leader of Opposition in the Madhya Pradesh Assembly Gopal Bhargava said, “some Congress leaders are linking saffron robes to crimes. This is absurd. It is this kind of statement which has brought Congress from 400 to 52.”

Bhargava added that “Digvijaya Singh is in the habit of insulting saffron and BJP. There is no relation of a colour to a person’s criminal activity. He is criticising saffron colour in the midst of those who are wearing this colour here. May God give him some wisdom.”

Singh’s remarks, however, were appreciated by the sadhus present at the convention, mostly in saffron and white robes, as he praised the Sanatan Dharma (religion), calling it the oldest in the world.

Singh, however, later clarified about his statement and said, “Our religion is a symbol of faith. People expect good behaviour from those who wear saffron robes. If some people in saffron attire indulge in criminal activities, then voices must be raised. We must protect our religion.”

Singh is no stranger to controversies. Earlier, on September 1, he claimed that more non-Muslims are spying for Pakistan’s ISI than Muslims in India. He had also accused the BJP and Bajrang Dal of working on behalf of the ISI. 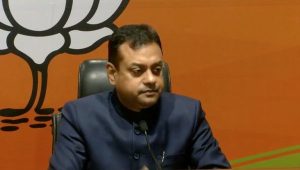