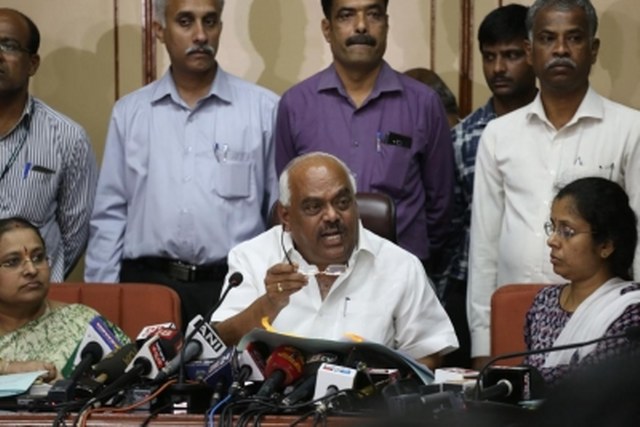 “The 3 legislators have been disqualified under the Anti-Defection Law (10th Schedule of the Constitution) on the recommendation of their party,” Ramesh Kumar told reporters here.

Though Shankar was elected in the May 2018 Assembly elections as a KPJP candidate, the Speaker said he had merged the regional outfit with the Congress after he was inducted into the cabinet on June 14 along with Independent H. Nagesh from Mulbagal in Kolar district.

“Congress legislature party (CLP) leader Siddaramaiah recommended Shankar’s disqualification on July 11 after he resigned from the coalition ministry and gave a letter to state Governor Vajubhai Vala on July 8 that he would support the BJP, which is a violation of the party’s discipline under the anti-defection law,” Kumar said.

All the three legislators will not be able to contest any assembly or parliamentary election till May 2023, when the 5-year term of the state assembly lapses.

Jarkiholi and Kumatahalli were disqualified for abstaining from the 10-day budget session of the Assembly in February against the whip issued to all party legislators on February 7.

“Though the party recommended disqualification of its 4 legislators, including Umesh Jadav (Chincholi) and B. Nagendra (Bellary Rural), Jadav resigned in March and acting against Nagendra is pending,” recalled Kumar.

A decision on the disqualification of the remaining 10 Congress rebel legislators will be taken in the next couple of days as its process is laborious.

“I will inform you when decision on the 10 Congress and 3 Janata Dal-Secular (JD-S) is taken in the next 2-3 days,” added Kumar.

In all, 15 rebel legislators, including 12 of the Congress and 3 of the JD-S resigned from their assembly segments between July 6-10, abstained from the 10-day monsoon session of the Assembly and defied their parties’ whip to be present in the House on July 23 when the floor test was conducted on the confidence motion caretaker Chief Minister H.D. Kumaraswamy moved and lost.

In addition to the rebels, Shankar and Nagesh, who resigned as ministers on July 8, also skipped the floor test despite pledging their support to the BJP.

Nagendra and another Congress legislator Srimanth Patil also did not attend the Assembly for the trust vote as they were in hospitals for treatment and informed the Speaker duly.

With 20 legislators, including N. Mahesh of BSP absenting for the floor test, Kumaraswamy lost the floor test by 6 votes, as the coalition allies polled 99 against 105 by the BJP in the division of votes, which resulted in the fall of their 14-month-old coalition government.