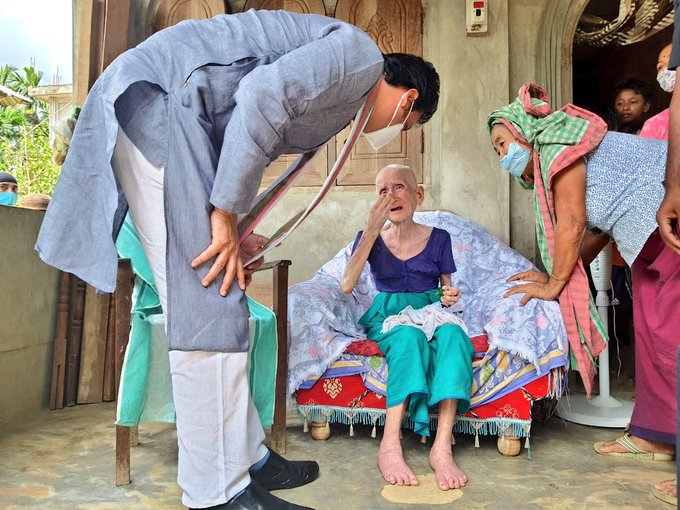 “Met Tarakanya Debbarma of Brahmacherra. The 105-year-old (recently) turned up at a vaccination center to take the vaccine against the Coronavirus. She recognised PM Modi at once when I showed her his pic. If she can take the vaccine, what’s stopping you all from doing it! Go, get the jab!” the Chief Minister tweeted.

Who’s 105-year-old, turned up at a vaccination center to take the vaccine against Corona Virus.

She recognised PM Modi at once when I showed her his pic.

If she can take vaccine, what’s stopping you all from doing!
Go, get the jab! pic.twitter.com/YwNSPD8TDA

“The Chief Minister was thrilled on hearing that the 105-year-old woman had voluntarily agreed to take the Covid vaccine shot and immediately decided to visit her residence personally and to greet her for joining in the vaccination drive,” the Chief Minister’s Office said.

Kumar Alok also tweeted: “121-year-old senior citizen in Brahmacharya under Matabari Block in Tripura gets vaccinated and sets a unique example. This will motivate many to take vaccination.”

The CMO and the health officials, however, said that according to the electoral list of the Election Commission, the woman’s age is 105 but her family members and the neighbours have claimed that she is 121 years old.

A senior health official said that the aged tribals were mostly born at their homes in remote areas and they traditionally did not preserve their official documents even as the neighbours of Tara Kanya Debbarma supported her claim of her age of 121.