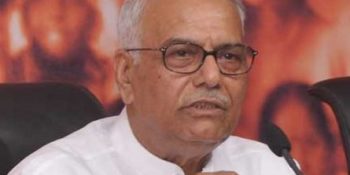 New Delhi : Former Union Minister Yashwant Sinha on Monday said it will be “unconstitutional” on part of the Narendra Modi government to present a full-fledged Budget instead of a vote-on-account in an election year.

“There are reports that this government is planning to present a full Budget this year as well as the Economic Survey. It is unconstitutional on part of the government. It has no authority to do it,” Sinha said in an interaction with mediapersons at Indian Women Press Corps (IWPC).

“If it does so, it would be the first government that would do so in violation of a long standing Constitutional convention. No government to my knowledge has ever presented a Finance Bill with a vote-on-account,” Sinha, who has served as the country’s Finance Minister twice, said.

He said in an interim budget, as per the convention, the government does not introduce any new service, nor does it bring Finance Bill or present the Economic Survey.

Asked if there was anything in the Constitution that prevents the government to not present a full Budget in an election year, Sinha said: “The Constitution’s conventions are as important as its written word. And what is Article 116 is in Constitution for?”

He also berated the Narendra Modi government over the state of economy, saying “he did not trust the government figures”.

He said when the government changed the base year and the formula for calculating the GDP, it should also have given the corresponding figures as per the old formula so that people could compare.

“In FY 2013-14, the growth rate as per the old series was around 4.5 per cent. But as per the new series introduced by the Modi government, that figure would be around 6.5 per cent,” Sinha said.

Speaking on the effects of demonetisation, he said a Labour Bureau report that was supposed to come out in December 2017 was still being put in abeyance as it would show a dismal picture.

“A report given to a parliamentary Standing Committee by the Agriculture Ministry on the impact of demonetisation on agricultural sector showed it in a poor light. That report was quickly withdrawn after criticism,” he said.

“The kind of agrarian distress we are facing today is unprecedented,” he said.