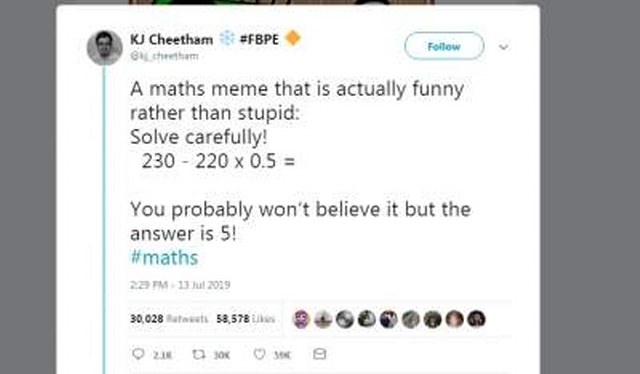 New Delhi:  If you are baffled by a viral mathematical equation that has taken the social media platforms by storm, you do not actually need to go too far but to check it with your Maths teacher at school.

The debate started on Twitter after a science enthusiast KJ Cheetham posted a Maths equation — 230-220×0.5 and declared “5!” as its answer.

“A Maths meme that is actually funny rather than stupid. Solve carefully! You probably won’t believe it but the answer is ‘5!,” Cheetham tweeted.

You probably won’t believe it but the answer is 5!#maths

Netizans were left scratching their heads but do you know the actual answer?

If you look closely, Cheetham has written the answer as ‘5!’. Here, the exclamation mark denotes the factorial of 5 as a number. It means 5 X 4 X 3 X 2 X 1 = 120, which is the correct answer, hidden in his question itself!

Applying the basics of mathematics, several users took up the challenge and solved the equation using the “BODMAS” method that suggests the sequence of solving as — brackets, of, division, multiplication, addition and subtraction — and derived “120” as the answer.

On the other hand, some users solved the equation face front — subtracted first and multiplied later to derive “5!” as the answer.

Some users, however, termed the equation “ambiguous”.

“Not at all ambiguous as multiplication always comes before subtraction,” tweeted Thony Christie, British-born historian of early modern science and Mathematics.

Even though math experts claim the correct answer is “120”, some users said they would not be convinced unless the original poster of the question accepts he was wrong and declares “120” as the answer.

However, Cheetham claimed that he did not invent the question but had merely shared it.