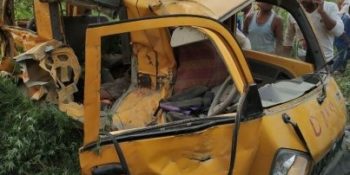 Gorakhpur/New Delhi :  At least 13 students under 10 years were killed when a speeding train rammed into their school van at an unmanned rail crossing in Kushinagar in Uttar Pradesh and halted only after dragging the mangled vehicle for some 100 metres.

At least four students and the driver of the van, who Chief Minister Yogi Aditynath alleged had an earphone and was listening to music while driving, were among the injured, doctors and officials said. Two of them were in critical condition.

The injured were rushed to Pandrauna Hospital, about 30 km away. Indian Railways spokesperson Ved Prakash told IANS that the children died on the spot.

“Shocked to learn about the horrific accident… Thoughts and prayers with the bereaved families and with those injured,” the President tweeted.A

Modi conveyed his deep pain over the incident and asked the Railways and Uttar Pradesh government to take appropriate action in the matter.A

Lohani also said that the railways had been aggressively removing unmanned level crossing in the last few years. He said 1,565 of them were eliminated in 2017-18 and the target is of removing 1,600 in 2018-19.

A North Eastern Railway official said at least 25 people, mostly children below the age of 10 years, were in the van.

“I am deeply anguished and pained by the loss of lives of young school children… My thoughts are with families of the deceased and I pray for the early recovery of the injured,” Railway Minister Piyush Goyal said in a statement.

The Minister announced an ex-gratia of Rs 2 lakh each to the kin of the victims, Rs 1 lakh to those critically injured and Rs 50,000 to those with minor injuries.

He said he had ordered an enquiry into the incident. “We stand committed to take all possible steps to avoid such accidents in future.”

An accident relief medical train from Gorakhpur was dispatched to the site.A

Adityanath visited the accident site and the hospital to meet the injured children. He directed the Divisional Commissioner of Gorakhpur to conduct a probe into the incident. He too announced an ex gratia of Rs 2 lakh each to the families of the deceased.

After meeting the injured at the hospital, he said: “I am told that the van driver was wearing earphones while driving… This is a case of pure negligence.

“An inquiry has been ordered… The guilty will face the most severe punishment,” he said.

Adityanath later told the media that prima facie the accident appeared to be the fault of the van driver, who apparently was listening to music on his earphones.A

“I spoke to the Railway Minister and have requested him to find a way out to ensure that such unmanned railway crossings be manned,” he said.

An official said the Chief Minister had ordered that school vans across the state be checked on whether they were following the safety guidelines or not.

In Lucknow, the Aam Aadmi Party (AAP) demanded that the railways appoint staff at all unmanned level crossings across the country to make them safer for people. 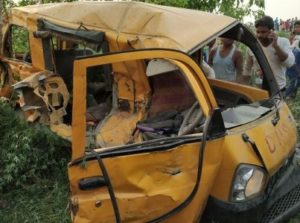