New Delhi | Twelve ministers have resigned from the Modi government including Law and IT Minister Ravi Shankar Prasad and I&B Minister Prakash Javadekar. President Ram Nath Kovind has accepted their resignations, a statement from Rashtrapati Bhavan said. Several heavyweight ministers resigned before the massive reshuffle of the Modi cabinet this evening. 43 new faces are […]

New Delhi: The Union Cabinet on Wednesday approved ‘Mission Karmayogi’ — a National Programme for Civil Services Capacity Building. The government hopes it will help civil servants remain entrenched in Indian culture while they learn from best practices across the globe. The Centre expects the programme to completely change the way civil servants or their […]

New Delhi: Soon after the Congress President demanded Home Minister Amit Shah’s resignation for allegedly being unable to contain the violence in Delhi, the BJP hit back calling the demand ‘laughable’. Bringing back the issue of 1984 anti-Sikh riot, union minister and senior BJP leader Prakash Javadekar countered by alleging that the Congress itself has […] 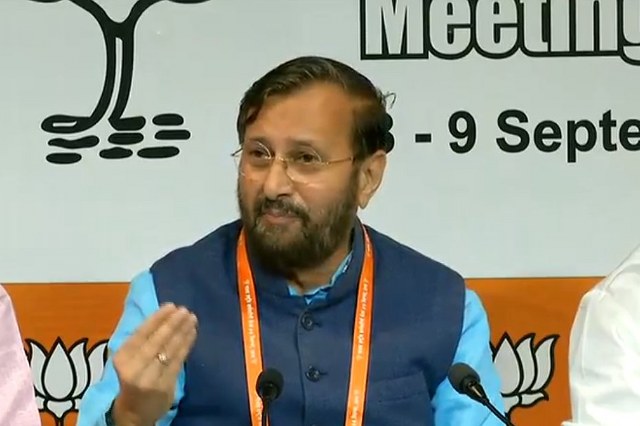 New Delhi: Soon after senior Congress leader P. Chidmbaram on Thursday held his first press conference after spending 106 days in jail, the Centre hit out at the former Union Minister, claiming that he violated court orders on the very first day after getting bail. Speaking to the media, Union Minister Prakash Javadekar said, “The allegation […]

New Delhi:  Environment Minister Prakash Javadekar on Friday slammed Delhi Chief Minister Arvind Kejriwal for politicising the issue of air pollution in Delhi and indulging in a blame game by blaming everybody, including neighbouring states and the Centre. Delhi has turned into a gas chamber due to smoke from crop burning in neighbouring states It […]

New Delhi: Union Environment Minister Prakash Javadekar on Wednesday said the Centre will give financial support of Rs 5.5 lakh each to 5,300 refugee families that had migrated to Jammu and Kashmir from Pakistan. Briefing mediapersons following a cabinet meeting, Javadekar said: “The first lot of refugees came to India after Partition and the second […]

New Delhi: Adding to the festive cheer for over 1 crore government employees and pensioners, the Union Cabinet on Wednesday approved a 5 per cent hike in dearness allowance (DA) raising it to 17 per cent. Addressing the media after the cabinet meeting, Union Minister for Information and Broadcasting Prakash Javadekar said that around 50 […]