Srinagar | A youth from Jammu and Kashmir’s Anantnag district became a millionaire overnight by winning Rs 2 crore in the online fantasy cricket platform Dream11. Belonging to Shalgam village in the Bijbehara area of Anantnag district, Waseem Raja said he can now treat his ailing mother. “I was fast asleep on Saturday late night, when […]

Srinagar | Fourteen terrorists have been killed since January 1 out of which seven were foreign nationals, including the one killed at the Line of Control (LoC) in Kupwara, Inspector General of Police, Kashmir Vijay Kumar said on Thursday While interacting with media in Kulgam after the killing of Pakistani terrorist Babar Bhai linked with proscribed […] 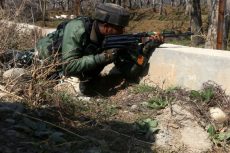 Srinagar | Two CRPF personnel and two civilians were injured after terrorists lobbed a grenade at Palhalan chowk in North Kashmir’s Baramulla district on Wednesday, officials said. According to details, the terrorists lobbed a grenade on a CRPF party in which two personnel and two civilians received minor injuries. The injured were moved to the hospital. […] 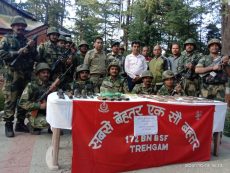 Srinagar | A cache of arms and ammunition was recovered in a joint operation carried out by the BSF and Jammu and Kashmir Police at Dardssun in North Kashmir’s Kupwara district, officials said on Thursday. The Border Security Force (BSF) said the operation was carried out on the basis of a specific intelligence input in a […] 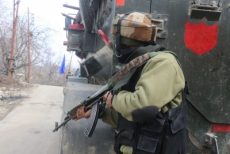 Srinagar | Five terrorists have been killed in an ongoing encounter between the terrorists and security forces in South Kashmir’s Shopian district, police said on Friday. The gunfight started on Thursday after a joint team of the police and the Army cordoned off the area and launched a search operation on the basis of a specific […] 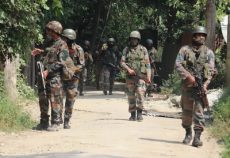 Srinagar |  One army soldier was killed in action and another army soldier has been injured in an ongoing encounter that rages on between terrorists and security forces at Wangam area in South Kashmir’s Shopian district on Saturday evening, officials said. Two unidentified terrorists have so far been killed in the encounter, police said. The injured soldier […]

Srinagar: Two unidentified terrorists were killed in an ongoing encounter between the terrorists and security forces at Bijbehara in South Kashmir’s Anantnag district, officials said on Thursday. The gunfight took place after the security forces cordoned off the area and launched a search operation on the basis of a specific information about the presence of terrorists. […]