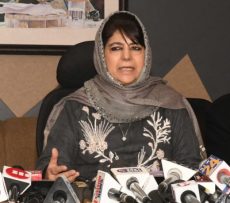 Srinagar: Two senior PDP were detained on Monday by a central agency for questioning in a money laundering case, evoking sharp reaction from party chief Mehbooba Mufti who claimed there was “no rule of law” in Jammu and Kashmir. Reports here said that officials of the investigating agency detained Sartaj Madni, who is also a maternal […] 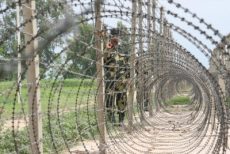 Jammu: Security forces have detained two girls who inadvertently entered Indian territory in Jammu and Kashmir from Pakistan-occupied Kashmir on Sunday morning, officials said. The Army said that Laiba Zabair, 17, and Sana Zabair, 13, of Abbasspur village in Forward Kahuta area inadvertently crossed over in the Poonch Sector of Line of Control. “Own troops deployed […] 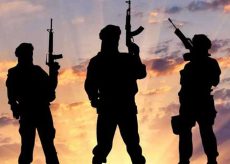 Srinagar: After nine months, 4G mobile Internet services were on Sunday restored in two Jammu and Kashmir districts – Udhampur in the Jammu region and Ganderbal in the Kashmir Valley, on a “trial basis”. An order issued by the Union Territory’s Principal Secretary, Home, Shaleen Kabra, said: “The high speed mobile data services in the districts […]

Jammu: An Indian soldier got martyred in ceasefire violation by Pakistan troops on the line of control (LoC) in Jammu and Kashmir’s Rajouri district on Saturday. Defence Ministry spokesman Colonel Devender Anand said that Pakistan Army resorted to unprovoked ceasefire violation in the Rajouri Sector. “Own troops responded strongly to the enemy fire. In the incident, […] 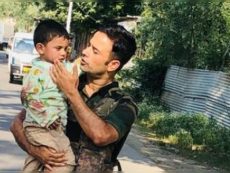 Srinagar: Days after a five-year-old was killed in a terror attack in South Kashmir, on Wednesday in another shocking incident in North Kashmir’s Sopore a civilian was killed right in front of his three-year-old grandson. The heartbreaking pictures that surfaced showed the boy sitting on the dead body. He was later taken by the army […] 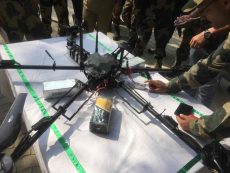 Jammu:  The Border security force (BSF) on Saturday shot down a Pakistani drone carrying weapons in Jammu and Kashmir’s Kathua district. Police sources said at about 5.10 a.m. on Saturday morning, BSF troopers spotted a Pakistani drone over the Panesar outpost on the international border in Kathua district. “On examination of the payload of the shot […] 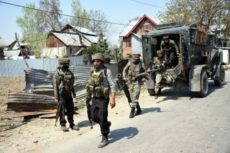 Srinagar: Three terrorists were killed in an encounter in South Kashmir’s Shopian district on Sunday, officials said. According to the details, security forces had a specific input about the presence of terrorists in the Reban village in Shopian. A cordon was laid in the village by a joint team of the army and police on Sunday […] 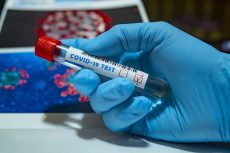 Srinagar: After a senior IAS officer tested positive for coronavirus in Jammu and Kashmir, over a dozen top officials went into self-quarantine on Sunday. Reports said the Commissioner/Secretary-level officer had tested positive late Saturday evening. The officer had attended a meeting in which other senior officers like a Financial Commissioner-rank officer, a Principal Secretary, and officials […]