New Delhi : A Samajwadi Party member on Friday contested the government’s claim that an FIR was registered against “unknown” persons in the Aadhaar data leak expose by the Tribune, saying the police case specifically mentioned five names including the English daily.

Neeraj Shekhar, a Rajya Sabha member from Uttar Pradesh, accused Union Minister of Electronics and Information Technology Ravi Shankar Prasad of misleading the house even as the Minister asserted that the Aadhaar data was fully safe and secure and there has not been a single case of data breach from the Unique Identification Authority of India (UIDAI) database.

In a written reply to the question by Shekhar, the Minister dubbed the media report that claimed that Aadhaar data was available to anyone for a sum of Rs 500 as “completely false”.

“Aadhar data is fully safe and secure and there has not been a single case of data breach from UIDAI’s database. The report in media about ‘Rs 500, 10 minutes and you have access to billion Aadhar details’ was a case of misreporting and is completely false,” he said.

“UIDAI, for the purpose of grievance handling, has provided a search facility to state government officials, which provide demographic information of the person whose enrolment ID or Aadhaar is provided. The reported case was a misuse of the said facility,” he said.

The Minister said the UIDAI had filed a complaint on January 4 with full details of the incident on which an FIR was registered by the Crime Branch in the Cyber Cell of Delhi Police against unknown persons under several sections of the Aadhaar Act and the IT Act.

“The response given by the Minister is false. He has said a FIR has been regiseterd against unkown persons while I have a copy of the FIR which clearly mentions names,” he said.

Even as the member was on his feet, Deputy Chairman P.J. Kurien adjourned the House till 2.30 p.m saying the Question Hour was over.

Later, Shekhar told IANS that he will write to the Chairman.

“I will give a notice of privilege against the minister after discussing the issue with the party leadership,” he said. 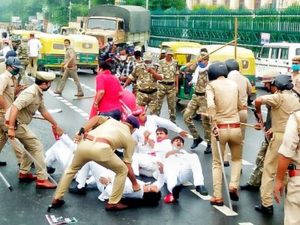