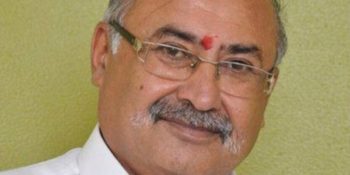 Gandhinagar : The Gujarat Directorate General of Police (DGP) has formed a Special Investigation Team (SIT) to probe the murder of Bharatiya Janata Party (BJP) leader Jayanti Bhanushali who was shot dead in a train on Tuesday morning.

Additional Directorate General of Police (ADGP) Ashish Bhatia told the media: “Victim Bhanushali boarded the train from Bhuj on the night of 7th (January) in H1 AC compartment of the train. We are questioning a fellow passenger named Maurya who boarded the train from Gandhidham station and later informed the railway police about the incident.”

Morya, after relieving himself, when returned to his seat, he saw Bhanushali lying there. He immediately called the TT of the train, the officer said.

“The TT then informed the railway police, who later called the Morbi district police control room who rushed to the train and took possession of Bhanushali’s dead body and sent it to Malliya government dispensary.”

From Bhanushali’s bag, the police recovered a service revolver and some cartridges. Besides, some live and used cartridges were also recovered from the crime spot.

“The victim was shot dead from a close range and these cartridges seem to be of some country-made pistol. We also found an outer shell of a bullet and a splinter of the weapon from the spot. We believe that the murder was an outcome of personal animosity with Bhanushali. We are also trying to get the CCTV footage of Malliya railway station and other adjoining areas to spot the criminals,” added the ADGP.

“We have also recorded a chain pulling incident between 00:55 and 00:58 a.m on Tuesday when the train was between Gandhidham and Samakhiali,” said Bhatia.

After the train reached Ahmedabad station, the police detached the H1 coach from the train and taken to the Kalupur railway yard where FSL officials, ballistic experts and fingerprint experts are carrying out the study of the scene.

“We have formed an SIT to probe the Bhanushali murder comprising the CID Crime officials and the railway police. The SIT will be helped by the Anti Terrorist Squad and Ahmedabad city Crime Branch,” added Bhatia.