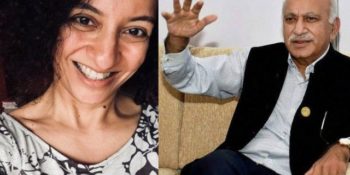 New Delhi :  “This is not M.J. Akbar vs Priya Ramani, this is the Union of India vs Priya Ramani. He has access to a battery of powerful lawyers: There are 97 listed in the legal notice. She has, thus far, one,” said Samar Halarnkar, Ramanis husband and a fellow journalist.

In a piece written for Scroll.in on Tuesday, Halarnkar, the editor of IndiaSpend said he and his wife have only “one important weapon” against the “vast resources” a Union Minister can deploy — and that is “truth”.

Akbar, the Minister of State for External Affairs, on Monday filed a crminal defamation case in New Delhi against Ramani who has accused Akbar of sexually harassing her as an editor.

Ramani is among several women journalists who have named Akbar for a range of inappropriate workplace behaviour.

Halarnkar said his wife never lacked courage. Yet, it took a “special kind of courage” to name a powerful Minister and former Editor.

“While she did not regard her action as taking on a Minister, she was somewhat aware that anyone who set the ball rolling might become a target. That is what happened.

“This kind of intimidation carries big benefits for small effort. We do not, for example, have institutional backing to fight the case Akbar has filed. We do not have friends in Delhi’s powerful circles of politicians, bureaucrats and lawyers. We know he has vast resources to deploy; it startled us to see how quickly he could get our home address,” he wrote.

He wondered if it was thanks to the culture of a normalised sexual harassment and male impunity in professional lives that “India’s elected government feels it can either ignore or mock the accounts of a diverse lot of women and stand by a lie”.

He rued at the lack of any “expressions of support” from opposition parties.

“(It is) because they are all complicit in maintaining the status quo. India’s patriarchy understands what is at stake and will not give in without a bitter fight. If an Akbar is conceded, there are countless others whose careers will be in jeopardy.

“Sexual misconduct in India has, thus far, been regarded a part of life — to be endured, and in so doing, confirming the supremacy of the male because, of course, men must be men and a woman must know her place,” he added.

However, said Halarnkar, the #MeToo movement has demonstrated that sexual harassment or intimidation was not normal and that no woman should have to put up with it. 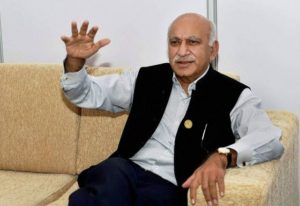