Bengaluru: The much-awaited floor test in the Karnataka Assembly could not be conducted on Thursday due to ruckus between the ruling Congress-JD-S and opposition BJP over the Governor’s ‘interference’ in the House proceedings, an official said.

“Assembly Speaker K.R. Ramesh Kumar adjourned the House proceedings at 6:00 p.m. amid ruckus between the ruling and opposition members over a message by Governor Vajubhai Vala to the former (Kumar) to conduct the floor test by the end of the day, the legislative official told IANS.

The Assembly will resume on Friday 11:00 a.m. the debate on the confidence motion Chief Minister H.D. Kumaraswamy moved earlier in the day to prove that his coalition government has majority in the House.

The Governor has sent a message through a Raj Bhavan official to the Speaker late afternoon to conduct the floor test by the end of the day after BJP legislators complained to him that the ruling allies were deliberately delaying the trust vote by prolonging the debate and raising extraneous matters to prevent the trial of strength. 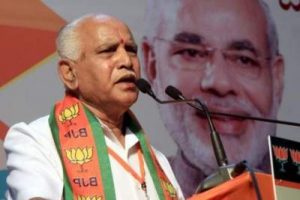