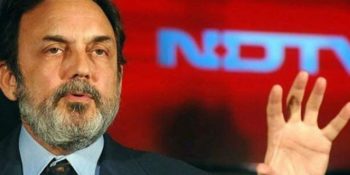 New Delhi/Mumbai (1 MIN READ): NDTV founders Prannoy Roy and his wife Radhika were prevented from leaving the country at the Mumbai airport on Friday.

The two have return tickets to India for August 16, but were stopped from travelling abroad over alleged corruption cases filed by the Central Bureau of Investigation (CBI) two years ago.

Labelling the cases as “fake”, the company said the Roys have been fully cooperating with the the CBI.

“In a complete subversion of basic rights, NDTV founders Radhika and Prannoy Roy were today prevented from leaving the country,” the company tweeted in protest.

NDTV said that the Roys have been stopped on the basis of “a fake and wholly unsubstantiated” corruption case filed by the CBI about an ICICI loan that was taken by their company, RRPR, and had been fully repaid with interest ahead of schedule.

It said that today’s action was, along with raids on media owners, “a warning to the media to fall in line”.

“Radhika and Prannoy Roy have been fully cooperating with the case and they have been travelling abroad regularly and returning to the country so to suggest they are a flight risk is ludicrous, ” NDTV said in a statement.

“The authorities did not inform the court, where the matter is sub judice, or the Roys, about today’s action. It is, along with events like raids on media owners, a warning to the media to fall in line – or else,” it added. 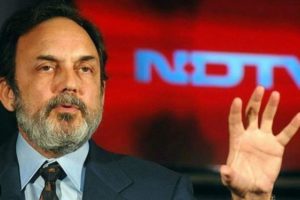