Mumbai:  A person was electrocuted and three were killed after being struck by lightning as rain pounded Mumbai and many parts of Maharashtra for the fourth consecutive day, disrupting normal life and hitting air, road and rail traffic, officials said on Monday.

A 30-year-old man, Mohammed Ayub Kazi, was electrocuted inside his home in Shivajinagar, Govandi suburb in north-east Mumbai. He was rushed to the Rajawadi Hospital where he was declared dead.

Three others, including a woman, were killed and two injured after being struck by ligtning as they took shelter from heavy rain in a shed in Solapur on Monday afternoon.

“The five victims were waiting for the rains to subside in a shed near the Mandrup village when suddenly lighting struck them. The three killed are Parvati M. Kore, 55, Chatursingh J. Rajpu, 41 and Sanket D. Chormule, 17. The other two have been rushed to the district hospital,” Mandrup police official Baburao Rathod told IANS.

Flights to and from Mumbai’s Chhatrapati Shivaji Maharaj International Airport were delayed by 35 minutes owing to heavy rain and low visibility, said an official.

Long-distance services on the Central Railway’s Mumbai-Pune sector were hit following the derailment of at least four wagons of a goods train between Jambrung and Thakurwadi in the Monkey Hill section of the Western Ghats early on Monday.

Several Mumbai-Pune trains were cancelled, some diverted and other long-distance trains hit at various locations en route as the CR made frantic efforts to restore normalcy.

Railway tracks were flooded at locations like Sion, Matunga and Kurla, impacting the CR’s suburban sector with trains running behind schedule, delaying lakhs of office-goers and students.

On the Western Railway (WR), some material from ongoing construction work fell and broke the overhead electric wires at Marine Line, hitting services on the slow line between Churchgate-Mumbai Central around 8 a.m.

Restoration was taken up on a war-footing and services were restored at 11 a.m., said a WR official, while heavy rains led to cancellation of several outstation services today.

Road traffic took the brunt of the heavy rain with water-logging in several areas of the city, eastern and western suburbs, though a majority of the subways escaped flooding as the BrihanMumbai Municipal Corporation activated pumps to throw out the gushing rain water.

As students were stranded in the rain in different areas, some schools in and around central Mumbai declared a precautionary holiday.

In Palghar district, the Surya River was hovering near the danger mark, posing a risk to at least 26 villages on its banks even as relief agencies were kept on standby.

The IMD has forecast heavy to very heavy spells in and around Mumbai on Monday, with rainy conditions likely to continue for the next four days, and temperatures at a maximum of 28 degrees and 23 degrees. 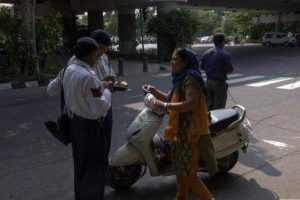 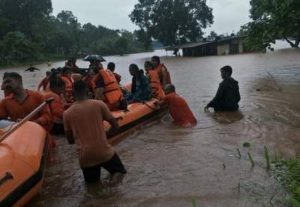