Mumbai, Jan 6 : Moving swiftly after the Mumbai Fire Brigade probe report, the police on Saturday arrested Yug K. Pathak, the son of a retired DGP-rank IPS officer and the co-owner of The Mojo’s Bistro, where 14 people were killed in a fire on December 29.

“He has been booked under the stringent IPC Section 304 pertaining to culpable homicide not amounting to murder,” said Deputy Commissioner of Police Sachin Patil, of the third overall, but first major arrest so far in the case.

The son of IPS officer K.K. Pathak — who had served as police commissioner of Pune and Nagpur, besides other important postings — Yug had been questioned last week as part of the investigation into the blaze which also left 55 persons injured.

Besides Yug Pathak, the police have also booked and summoned Yug R. Tuli, a businessman from Nagpur who is one of the partners in The Mojo’s Bistro, for questioning in the matter, police said.

On December 30, the police had filed three first information reports against at least two of the pubs – The Mojo’s Bistro and 1Above — besides Ramesh Govani, the owner of the sprawling Kamala Mills Compound, Lower Parel, where these high-end establishments are located.

The police action was initiated after the Mumbai Fire Brigade (MFB) probe report said that the deadly fire started in The Mojo’s Bistro’s and spread to 1Above and other pubs in the vicinity leading to the tragedy.

“Since they (MFB) have opined that the fire started from The Mojo’s, we have included the names of the concerned as accused. Action will be taken soon,” Joint Police Commissioner (Law & Order) Deven Bharti informed the media.

On Friday, Mumbai police announced a reward for the whereabouts of the absconding owner-partners of 1Above pub – Kripesh Sanghavi, Jigar Sanghavi and Abhijeet Mankar.

Last Monday, (January 1), the police had arrested two managers of 1Above pub – Kevin Bawa and Gibson Lopez in the same case and were remanded to police custody till January 9.

Earlier on December 31, the police arrested two relatives of the absconding Sanghavi duo – uncle Rakesh Sanghavi and cousin Aditya Sanghavi – for giving shelter to the co-owners of 1Above pub, Kripesh Sanghavi and Jigar Sanghavi, against whom a reward has been announced.

The uncle-cousin (Rakesh Sanghavi and Aditya Sanghavi) were produced before the Bhoiwada Court and released on a bail of Rs 25,000, even as the police were on the lookout for another relative. 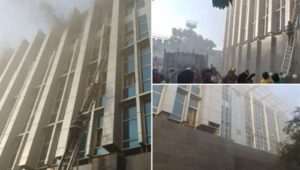