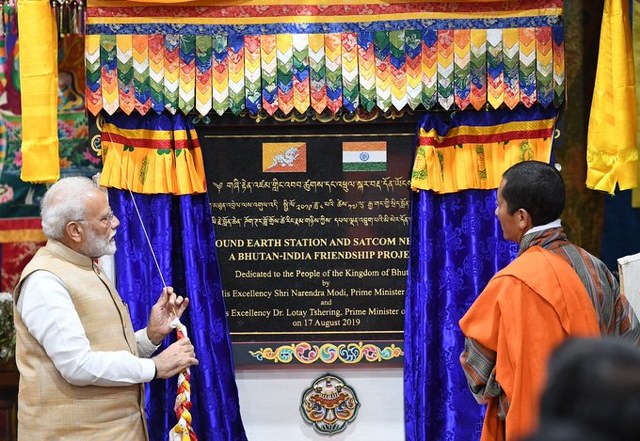 Thimpu: In a bid to take India-Bhutan relationship beyond hydro-power, Prime Minister Narendra Modi on Saturday launched several projects in different areas from LPG to space technology, as well as enhancing cooperation in science and education sectors.

Addressing a press conference with his Bhutanese counterpart Lotay Tshering on the first day of his two-day visit, the Prime Minister announced major assistance to the Himalayan country including increasing its clean fuel supply, launch of Rupay card, and a foreign currency swap arrangement.

The conference followed talks between the two leaders.

Recalling his first visit to Bhutan after taking over as Prime Minister for his first term in 2014, Modi said: “Bhutan has a special place in my heart. During my previous stint, I selected Bhutan for my first state visit and by visiting Bhutan again during my second term I am very happy.”

Terming hydro-power an “important area of cooperation” between the two countries, he said: “Together, the two countries have transformed the power of the rivers of Bhutan into not only electricity but also mutual prosperity. Today we have achieved another historic milestone of this journey with the inauguration of the Mangdechhu project.

“With the cooperation of both countries, hydro-power generation capacity in Bhutan has crossed 2,000 MW. And I am confident that we will also take other projects forward very fast.”

The Prime Minister also announced that to meet the demands of the people of Bhutan, India is increasing the supply of liquified petroleum gas (LPG) from 700 to 1,000 metric tonne per month. “Through this, we will be able to provide clean fuel to the villages,” he said.

Remembering that Tshering told him in their first meeting that his main motivation for joining politics has been to provide good health services to the common man, Modi said: “I was very impressed with his vision. India will extend all possible help in realizing the dream of multi-disciplinary super-specialty hospital in Bhutan.”

He said that under the SAARC currency swap framework, India was “positive” at increasing the limit of currency swaps for Bhutan. “Meanwhile, an additional $100 million will be available to Bhutan under the standby swap arrangement to meet its foreign exchange requirement,” he said.

The Prime Minister also inaugurated the ground station built by India’s space agency ISRO to allow Bhutan to use the South Asian Satellite for communication and disaster management.

“India is committed to accelerate the development of Bhutan using space technology.

“We have inaugurated the earth station of the South Asia Satellite today and this will increase coverage of communication, public broadcasting and disaster management in Bhutan,” he said.

For these purposes, extra bandwidth and transponders will also be made available as per Bhutan’s requirement, he added.

“Both countries will also cooperate in the construction of small satellites and the use of space technology,” he said.

“Royal University of Bhutan and IITs will cooperate under this programme and five Post Graduate scholarships for Bhutanese students will be provided by the Nalanda University in Bihar for five years,” he said, adding that he was eagerly waiting to meet the students of the Royal Bhutan University on Sunday.

Launching the Rupay card in Bhutan, he said: “It is a step towards digitising transactions and deepening business and financial cooperation between the two countries.”

Modi also said that India’s assistance to Bhutan through the five-year-plans will continue, and their “focus and priorities” will be determined by the Bhutanese people’s “desire”.