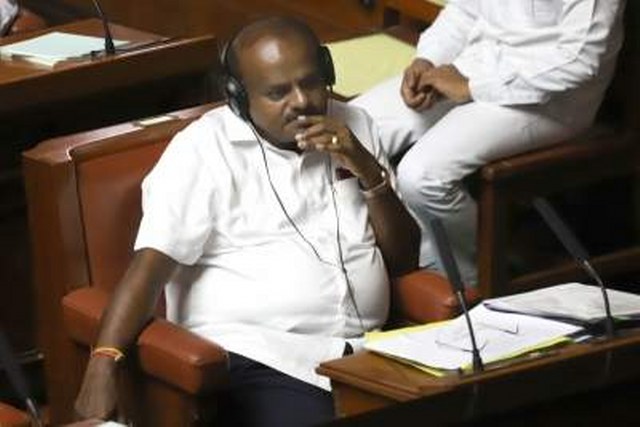 Bengaluru:  Karnataka Governor Vajubhai Vala on Friday extended the deadline for Chief Minister H.D. Kumaraswamy to prove his government’s majority in the state legislative Assembly here till 6 p.m., after the latter missed the 1.30 p.m. deadline set by the Governor.

“The Chief Minister failed to prove majority in the Assembly by 1.30 p.m. the Governor had set on Thursday through a letter to him,” opposition BJP leader B.S. Yeddyurappa told Speaker K.R. Ramesh Kumar after the deadline lapsed.

When the former two-time BJP chief minister urged the Speaker to conduct the floor test forthwith, Kumar said he would do it after completing discussions on the confidence motion by the treasury and opposition members under the 202 business rules of the legislature.

“Voice vote on the confidence motion only after discussions on it by the treasury and opposition members. Division of votes will be if anyone asks for it after the voice vote,” said Kumar.

In a letter on Thursday night, Vala had directed the Chief Minister to prove majority by 1.30 p.m. on Friday after Kumar failed to do it by the end of Thursday.

The deadline came in response to a BJP complaint to the Governor on the dilatory tactics of the ruling allies (Congress and Janata Dal-secular (JD-S) on the confidence motion that Kumaraswamy moved on Thursday.

“I require you to prove your majority on or before 1.30 p.m. tomorrow (Friday), said Vala in the letter after his Thursday’s order to complete the floor test by the end of the day also lapsed.

Resuming the inconclusive debate on the motion, stalled six times due to ruckus between the lawmakers of the ruling allies and the BJP, Kumaraswamy said it was for the Speaker to decide on the Governor’s order when he should prove the majority on the floor of the House.

“It is not for me to decide by when I should prove the majority but the Speaker who is the custodian of the House and supreme in deciding how the session should be conducted,” said Kumaraswamy.

Intervening the debate, state Law & Parliamentary Minster Krishna Byre Gowda said the Governor cannot give such an order on a motion Kumaraswamy moved on Thursday and was being debated by the ruling and opposition members.

“We fail to understand how the Governor could direct the Chief Minister to prove majority in a limited time-frame without completing the debate by both sides and listening to the Chief Minister’s reply on it as mentioned in the rule book,” said Gowda.

A restive BJP told the Speaker not to allow the ruling combine to further delay the floor test as there was no stay on the trial of strength from the Supreme Court.

Rejecting the BJP’s demand, ruling lawmakers dubbed the Governor a BJP agent and asked him to go back and convert the Raj Bhavan into a BJP office.

As on Thursday, about 20 legislators, including 14 from the Congress, 3 from the JD-S and three Independents were absent in the 225-member Assembly when the session began.