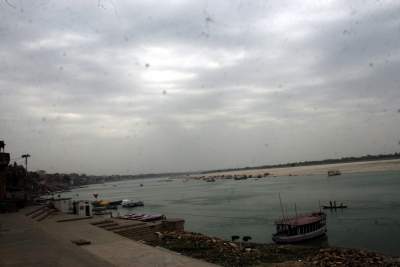 Kanpur: Putting an end to a seven month closure of tanneries in and around Kanpur and Unnao, the Uttar Pradesh government has decided to allow them to restart on condition that they will follow norms laid down by the National Green Tribunal (NGT) .

The government has also decided to set up a separate 20 MLD waste treatment plant at Jajmau in Kanpur to ensure that the tannery waste is not released directly into the Ganga River.

According to Kanpur District Magistrate Vijay Vishwas Pant, the state government has cleared a project worth Rs 617 crore to check the release of tannery waste into the Ganga River.

Of the total amount sanctioned, Rs 480 crore would be used to set up a 20 MLD treatment plant while the remaining would be used for the maintenance of the plant, the district magistrate said.

It may be recalled that the state government had ordered closure of over 260 tanneries situated on the banks of the river Ganga in November 2018 to ensure clean water in the river for the Kumbh Mela.

The ban was to be lifted in March this year after completion of the Kumbh Mela but continued causing huge losses to the tannery owners as well as labour.

The leather industry in Kanpur has welcomed the state government’s move to reopen the tanneries, but has also urged the government to fast-track work on setting up effluent treatment plants (ETP) to check pollution.

Most tannery owners are concerned about survival of their units due to the rider on restricted production. “Government and Uttar Pradesh Pollution Control Board must consider the break-even line of production or industry would sink,” said Gulrez Mohammad, owner of a tannery.

He said that the government should expedite work on effluent treatment plants ETP and complete it at the earliest so that the industry can operate in full capacity.

The restrictions imposed on tanneries were to reduce production by almost 50 per cent and reduce infrastructure accordingly.

According to UPPCB officials, as many as 106 tanneries are operating in Banthara and Unnao. The team had earlier collected samples from the tanneries from May 20 to 24 and found that they were flouting pollution control norms.

Earlier, Chief Minister Yogi Adityanath had constituted a high-powered committee to examine if the waste from tanneries was being discharged directly into the river. The committee had to examine if the tanneries were following the standards fixed by UPPCB and the recommendations of the National Green Tribunal (NGT) to check river pollution.

The special committee headed by state Industry Minister and Kanpur MLA Satish Mahana recommended the opening of those Kanpur tanneries which were following the anti-pollution norms.

Kanpur District Magistrate said a special purpose vehicle (SPV) was in place and the process of setting up a separate treatment plant was on.

The land for the treatment plant would be made available by the Uttar Pradesh Jal Nigam to Jajmau Tannery Effluent Treatment Association, the official who is also the chairman of the SPV, said.

The district magistrate said the treatment plant would be set up conforming to the standards of UPPCB to ensure that there were least chances of shutting the tanneries, while the pollution levels of the Ganga could also be kept in check.

Naiyar Jamal, of Kanpur Tanneries Association, meanwhile, said that the industry is being asked to pay for inefficiency of the state administration.

“UP Jal Nigam takes money from each one of us for the operation and maintenance of the treatment plant, yet there has been no upgradation for more than two decades. The old plant had the capacity to treat 175 tanneries in 1996, after which more than 500 tanneries have come up. No work on capacity building has been done and the old plant has started overflowing”, he pointed out. 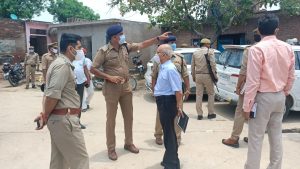 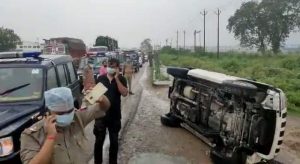 File Photo of the encounter site where gangster Vikas Dubey was killed by UP STF (Photo: IANS)