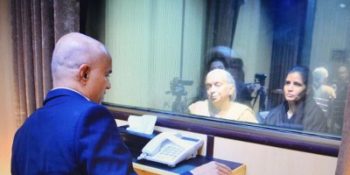 The meeting started at 2.18 p.m. and was still in progress, according to the Foreign Office. Indian Deputy High Commissioner J.P. Singh, who accompanied Jadhav’s family, was seen watching the reunion from a distance.

Pakistan Foreign Office spokesperson Mohammed Faisal tweeted images showing Jadhav speaking to his mother Avanti and wife through an intercom with a glass panel separating them.

Pakistani authorities have said the meeting was allowed “purely on humanitarian grounds”, though it did not allow one-on-one meeting between Jadhav and his family.