It has been raining heavily in several parts of the state since Tuesday evening. The authorities were forced to open 33 dams across Kerala.

Those reported dead on Wednesday were a couple in Malappuram who were crushed after their house crumbled. Their six-year-old child is missing.

A person died in a Munnar lodge as it crashed. A 70-year-old woman in Ranni near Pathanamthitta was electrocuted as her house was submerged.

The Idukki dam floodgates were reopened late on Tuesday as the water level in the Periyar river and its tributaries flowing through Ernakulam and Thrissur districts rose menacingly.

Following flooding in and around the Cochin International Airport, all flights were cancelled till 2 p.m. on Wednesday.

The Met has forecast more rains till Saturday.

Authorities are maintaining a close vigil especially in Idukki district as the shutters of the Mullaperiyar dam were also opened at 2.35 a.m. after its water-level crossed 140 feet.

People living in and around the dam were evacuated late on Tuesday.

Leaves of all revenue department officials have been cancelled, authorities said.

Rains which started on August 8 are said to have caused the worst damage to Kerala since 1924. Over 50,000 people are in relief camps and the damages to crops and properties is estimated to be over Rs 8,000 crore. 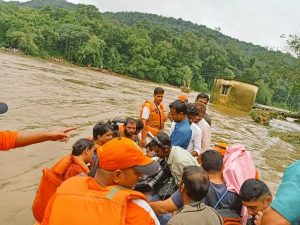 People being rescued from waterlogged areas in Kerala (Photo: IANS)