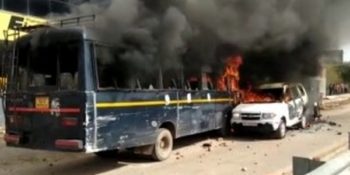 Jaipur | The Gujjar agitation for reservation in Rajasthan turned violent on Sunday, third day of the stir, when protesters clashed with police personnel near Dholpur.

As gun shots were heard, the police fired tear gas shells to disperse protesters, police officials said. However, no casualties have been reported.

The police intervened when protesters were trying to block the national highway No. 3 near Dholpur.

A strong contingent of police personnel was deployed on NH 148D near Nainwa as well as Bhilwara, which was blocked by protesters.
Rail traffic on the Mumbai-Delhi route remained disrupted for the second day on Saturday.

The Gujjar Aarakshan Sangharsh Samiti (GASS) launched agitation in the state on by blocking highways and traffic on the Mumbai-Delhi rail route. They are demanding five per cent reservation in government jobs and education institutions.

The Gurjars are classified as Other Backward Class (OBC) in some states and Union territories. In Jammu and Kashmir and some parts of Himachal Pradesh, they are categorised as a Scheduled Tribe.