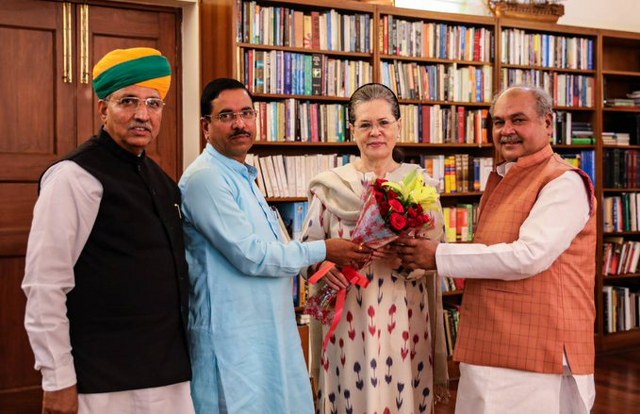 New Delhi:  With heavy legislative agenda that includes 10 ordinances, the government on Friday reached out to UPA Chairperson Sonia Gandhi to seek her cooperation in smooth running of the Parliament session with three Union ministers visiting her 10 Janpath residence.

Agriculture Minister Narendra Singh Tomar, Parliamentary Affairs Minister Pralhad Joshi and his deputy Arjun Ram Meghwal met Gandhi to seek support of Congress and its allies in getting the crucial bills and ordinances passed. The Lok Sabha session will begin on June 17 and is the first since the LOk SAbha elections.

Among the ordinances that the government will seek to pass as bills is the one on triple talaq on which Congress has reservations. The Muslim Women (Protection of Rights on Marriage) Second Ordinance was promulgated on February 21.

These ordinances were promulgated between March 1 and 7.

Pralhad Joshi told reporters after meeting Gandhi that she also sought cooperation of the the government in raising issues.

“It was a cordial meeting and we sought her cooperation for the smooth functioning of Parliament. She (Sonia) sought support from treasury benches to which I assured her of all support from the government,” Joshi said.

The meeting lasted over 20 minutes.

On June 5, Joshi, along with the two ministers of state in his ministry – Meghwal and V. Muraleedharan – met Leader of Opposition in the Rajya Sabha, Ghulam Nabi Azad, at his residence.

The government is likely to convene an all-party meeting in Parliament House on June 16, a day ahead of the start of the Lok Sabha session.

The first session of the newly-elected Lok Sabha has been convened from June 17 to July 26 and the Budget will be presented on July 5.

The 40-day session will have 30 sittings. The first two days of the session have been kept for oath-taking by the newly-elected members and election of Lok Sabha Speaker will take place on June 19.

President Ram Nath Kovind will address the joint sitting of the Lok Sabha and the Rajya Sabha on June 20 and the subsequent days will see a discussion on the Motion of Thanks to his address.

The Economic Survey will be presented on July 4.